A Chat with Canopy Meg

As an aspiring ecologist and rather nerdy science enthusiast, having the opportunity to meet Meg Lowman was a gift to me. Our class took a field trip to the California Academy of Sciences in San Francisco, one of the largest and most prestigious natural history museums known by scientists all over the world. We were told we were going to be led by Dr. Margaret Lowman, a world-renowned canopy field biologist and conservationist. Having been nicknamed the ‘Real-life Lorax’ by National Geographic and ‘the Einstein of the Treetops’ by the Wall Street Journal (Lowman 2016), we were all taken by surprise that such a distinguished scientist was going to spend the day with us.

Meg took us through the museum, leading us through the rainforest exhibit, offering us information and insight about the plants, insects, and animals we were seeing, and inspiring our group with her undeniable and self-evident passion for biodiversity.

The thing that surprised me most when first meeting Meg was her authentic character. She was approachable and genuine even with her numerous qualifications and accomplishments. She listened to our questions sincerely and answered them with thoughtfulness. Her warm and familiar nature became clear when she told us to call her just ‘Meg’.

When I asked Meg what traits made her successful in her work, she laughed and answered, ‘maybe a little bit being a mom- that sounds funny’. But in truth, I think her kindness and motherly disposition were what inspired me most about her and what drew me to meet her again and interview her as a scientist and an ‘agent of social change’.

Who is Canopy Meg? 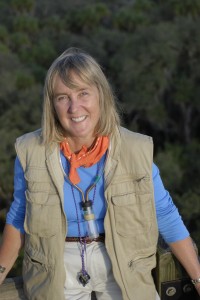 Meg Lowman is most often known for her biological and ecological work uncovering the biodiversity of treetop canopies, studying canopy ecology and ecosystem health. She is most famous for her imaginative and innovative endeavors such as the construction of canopy walkways and exploration of treetops using hot air balloons. These ventures have earned her the nickname ‘Canopy Meg’ and ‘the mother of canopy research’ in the science world. Today, she works at the California Academy of Sciences as the Director of Global Initiatives, a newly created position that aims to create a ‘global strategy for the academy’s biodiversity science and sustainability and promote it to local and international audiences’ (Lowman 2016). Her position poses questions such as, ‘How can we think harder about what priorities we need to institute internationally?’ and ‘What countries need more research? Which countries are underserved?’ By asking these kinds of questions, she is able to develop projects that create successful sustainability outcomes on a global scale. 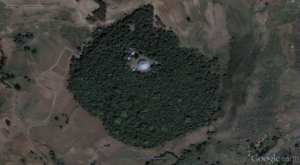 In 2000, Meg helped found the TREE foundation, a small grassroots, non-profit organization that is dedicated to tree research, exploration and education to ‘advance the conservation of our planet’s botanical resources and ecosystems dependent upon them’ (TREE Foundation 2016). Projects from this organization focus on the biological and ecological benefits of conservation but also address the important societal benefits conservation can give to local communities.

One of the projects the TREE foundation is currently working on is the Ethiopian Church Forest Project. This project heavily incorporates both an ecological and social component; by conserving the biodiversity of the forests, the ecosystem services that are essential to local communities and people are preserved. In Ethiopia, almost 95% of its original forests have been destroyed for agriculture and timber harvesting (Lowman 2016). Much of the remaining forest is conserved in areas near Orthodox Churches, where stewardship and appreciation of nature and God’s creatures is an esteemed belief. These forests are priceless biodiversity libraries that are yet to be explored and documented. Unfortunately, the forests could disappear within ten years with current projections (Lowman 2016).

In 2008, Meg met Dr. Alemayehu Wassie Eshete, a local scientist with a passion to conserve these disappearing church forests. He unfortunately had little to no support locally or globally on his mission. Meg says, ‘it was kind of like fate, I guess, because how could I just shake his hand and walk away’. Together they began working on the Ethiopian Church Forest Project.

This project drew me in and took hold of my interest because of its ‘socio-ecological aspects’, as Meg calls it. The ability to incorporate the study of biodiversity, conservation of the natural ecosystem as well as the applied social value to local communities is something that is extremely difficult in practice but is executed extremely well with these church forests. By conserving these forests, scientists are able to study the native biodiversity and at the same time are able to improve and conserve the ecosystem services for the local people through ecosystem services such as ‘fresh water, pollinators, honey, shade, and spiritual value’ (Lowman 2016). Conserving the church forests gives a direct social benefit to the local communities. Meg says, ‘we realized that we couldn’t just do the science, we had to make sure that conservation was very visible and prominent’. Throughout the project, Meg and her team were able to teach the local community about ecology and the value the forests harbored through educational program for kids. She hopes that by instilling the values of stewardship and conservation in the younger generation, the value of the forest and the conservation of the forest can become a self-sustaining process. 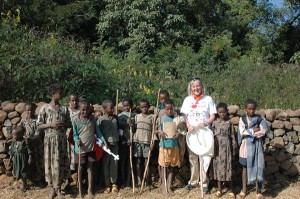 The success of the project came from one ingenious idea that Meg says came from the priests themselves. Walls made of stones from nearby agricultural fields are used to create walls around the forest. These walls prevented human activity such as agriculture from contributing to forest decline while also improving crop yields for farmers. The creation of the wall is a simple yet impactful action; by limiting human influence on the forests, biodiversity and ecosystem services for communities are conserved. Meg says, ‘the priests were so appreciative of the knowledge [of the value of the forests] that it was their idea to build these walls, not mine- and when you have ideas generated from within, that makes the project so much more successful’.

An agent of social change?

When I asked Meg if she thought of herself as an ‘agent of social change’ or someone who works to create positive change in an area of social justice, she answered yes, to my relief. Meg says that although she isn’t putting a big publication in journals such as Science or Nature, she still believes this project to be a huge success. She brings up the dichotomy scientists often face in academia of ‘how do we contribute to what’s really important to the local people versus advancing our own careers’ and how ‘they don’t always necessarily go together’. She describes this as a shortcoming of academia, where applied outcomes, or what she calls, ‘sustainability science’ is not particularly valued. ‘It is not acceptable in our world as much as it should be’, Meg says.

Although her work has not been recognized as widely in the world of academia, the Ethiopian Church Forest Project has received recognition in other forms such as publications in childrens magazines, articles in African Geographic, chapters in books and invitations to speak on behalf of the project. The project has even inspired a documentary, which will hopefully be competing at the Sundance festival.

Since the implementation of the project in 2004, 14 out of the 28 most diverse forest patches in Ethiopia have now been protected, without a lot of money and also without much political corruption. She says she has an ‘ethical and moral obligation to continue’ to both the people and to the forest ecosystems, and plans to continue the other half until completion. Funding has been a difficulty throughout the whole process, as these applied projects often receive less funding than pure science projects. Meg says, ‘in my dreams there would be bigger, better foundations and funders of this kind of project- until we accept that those applied outcomes need to be funded- it really hurts any type of opportunity for that kind of integration [between science and social value]. It’s still not conventional in our world of science’. However, the environment is so intrinsically linked to every part of our human society that conservation always carries social value and benefit to people.

After asking Meg about how to improve these integrations between science and social value she brought up and emphasized the idea of bottom-up conservation, where scientists work together directly with local communities. She says, ‘Getting to know locals, getting your feet muddy, getting out there are really understanding people’s priorities is so critical- so in some ways I think conservation is more of a people subject than a science subject when it really comes down to it’.

Advice for future conservationists from Meg

My interview with Meg lasted no longer than an hour, but in that time Meg’s kind personality and her genuine concern for the conservation and protection of these forests and the local people who rely on them became very clear. At the end of the interview, I asked her if she had any advice for others who are pursuing a career in conservation, and she granted us some wise words.

“We need to have humility and compassion if we’re going to succeed in conservation as scientists in the field. All of those traits don’t necessarily come from having a good class in chemistry or science or learning how to make a model- they come from some different part- like your heart” – Meg Lowman

Jenna Yonenaga is currently a senior at the University of California, Davis studying Environmental Science and Management with an emphasis in Ecology, Biodiversity and Conservation. She strives to obtain a strong science background in ecology and biology to understand how to create effective management plans for our ecosystems. In the future, she hopes to work to conserve native and endemic species populations in the face of global change. She wrote about the importance of creating conservation non-profits as part of her coursework, and this is her final interview essay about TREE Foundation.