The Wise Man Built His House Among the Trees

The Wise Man Built His House…Among the Trees

Earlier this year, I applied for a National Science Foundation Research Experience for Undergraduates (REU) program. Its title – Undergraduate Research into the Cultural, Economic and Ecological Significance of Church Forests in South Gondar, Ethiopia – was seemingly descriptive. However, when I was accepted to the program, I wasn’t aware how full the experience would be. We spent the first few weeks at Colby College in Maine learning about Ethiopian culture and language and undergoing rigorous training on research ethics and methods. Our time in Ethiopia, starting mid-July, was fast-paced and intense, spent mostly in the church forests, collecting data and implementing experimental design. 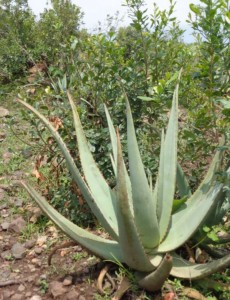 Aloe in the shrub-dominated landscape north of Debre Tabor, Ethiopia.

But even as we continued to work through the first week of August, busy as we were, we still held true to the itinerary and took time to drive several hours north from Bahir Dar to one of Ethiopia’s most famous cultural tourism destinations, the Lalibela cave churches.

The drive in itself was in many ways just as impressive as the destination. Despite being crammed into a utilitarian van, I enjoyed birding along the way. The verdant landscape of northern Ethiopia in the summer is home to many bird families completely unfamiliar to me; even more are off and away on migration in more northern countries during the summer months. With my eyes out the window constantly, I also noticed the increasing abundance of dusty green Eucalyptus trees as we moved on past Debre Tabor. This was a heavily degraded landscape, with almost complete deforestation of the native trees. Shepherding was a part of life, as demonstrated by the combination livestock stable and human-living-space edifices speckled throughout the pastureland.

In the distance, heavy patches of dark green, often with a round roof glinting from the center, called my mind back to where we had been spending the previous two and a half weeks. Each of the four church forests we had visited was so unlike the other three that I couldn’t help but be jealous of those church goers who had the right and privilege to experience these other green gems off in the distance; many of the churches seemed inaccessible by any road, perched at the top of a spire of rock, or hidden in a gorge. 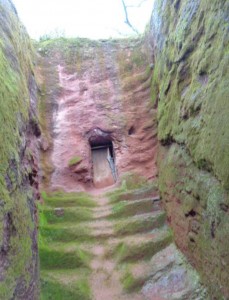 Steps into one of the cave churches at Lalibela, Ethiopia.

As we carried on, ragged acacias and aloes began to dominate the landscape. There was little grass and mostly shrubs. In spite of it being the rainy season, the grass had not yet established. Shepherds were cutting branches from acacias from which their animals could gingerly nibble the leaves. Large, rocky washes surrounding streambeds indicated that large volumes of water occasionally rushed down them, but only trickles were constant. What a change from the seemingly productive and actively used landscape just on the other side of the mountains!

We were in Lalibela the next day, ducking through the rock-hewn churches and tunnels. All was astounding. Devotees of the Ethiopian Orthodox Church have worn the steps and pillars in these churches smooth since their twelfth century creation. Ancient baptismal pools are still used. Paintings from the brush of Priest-king Lalibela himself still adorn some of the halls of the churches. Legends and mysteries of construction abound. The skeletons of pious pilgrims rest within the hewn cliffs as well as sleeping alcoves for monks and nuns. Our guided tour could hardly satisfy our group’s desire to explore and discover. I enjoyed seeing the unique ecosystems that have formed within these rock creations. Small baptismal pools filled with reeds, and little pockets in the rock carpeted with insect wings and bird droppings reminded me that humans weren’t the only ones who found these places important, albeit for different reasons.

UNESCO has classified these sites in Lalibela as having great cultural and physical significance; immense manmade structures now protect the weathered rock from further damage, and an organized and regimented system of security regulates those who come and go with fees and permission certificates. To be in these places, where for centuries, people have hoped and prayed for good and bad and trusted in a higher power, was surreal. 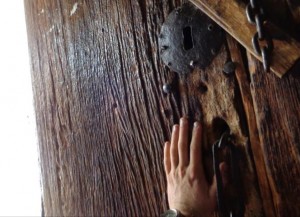 A hewn Juniper doorway to a Lalibela church.

Maybe it was because all of the hopes and energy put into prayers never fully left the hard rock walls, or maybe the incense would become a bit overpowering at times, but there were times when I felt a bit overwhelmed, needing to step out for some sunshine.

On the way in or out of the churches, it was impossible to miss the thick, weathered, rugged slabs of ancient wood which served as doors. To see the remains of apparently gigantic trees brought my thoughts back to the church forests. Many church forests date back as far or further than the construction of Lalibela, but not being made of rock, it is perhaps more difficult to sense the generations of shared experience held within those groves. Trails in the forests have been used for centuries, maintained by the feet of worshipers and cattle and resident monkeys. Prayers and chants have echoed through the trees; countless people been laid to rest beneath the canopies. Are these not also places of great cultural and physical significance? 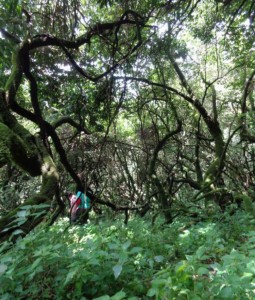 A rock church can hold and support human spiritual experience and practice. Church forests are linked in this same way to their human patrons, but also provide both direct and indirect ecological benefits.

I was raised to be a reverent person, and have always lived with a fascination of and curiosity towards nature. Initially, the story behind church forests intrigued me, but with more opportunities and time to reflect, I have come to realize their unique roles as wellsprings of both physical and spiritual resources. With these realizations, I understand the importance of the action being taken to raise awareness and promote healthy management. Church forests are unique and unlike rock. They cannot be sheltered from the elements and preserved like the Lalibela churches. The church forests are alive. This is perhaps their most important and exciting characteristic. Life in the forest is not like a rock that is aging and eroding with time. Yes, improper management of some church forests as a resource to support human endeavors has changed the forests and perhaps degraded their abundance or ecosystem functions. But with the proper attention, genuine restoration can be accomplished.

Life is already trying to fight the eroding forces threatening church forests. It is on our side when it comes to perpetuating these biologic equivalents of Lalibela.

The REU Site Undergraduate Research into the Cultural, Economic and Ecological Significance of Church Forests is a collaborative effort by the Colby College Environmental Studies Program, the Colby Biology Department, the California Academy of Sciences, the TREE Foundation, and Ethiopia’s Debre Tabor University. Each summer the program provides eight undergraduate students from diverse academic backgrounds an opportunity to conduct path-breaking interdisciplinary research on the cultural, economic and ecological roles of church forests in Ethiopia.