The summer of 2013 proved to be an exciting time of discovery for eight undergraduate students, myself among them, who traveled from around the country to intern at Baker University in Kansas, looking to gain experience in biological field research.

Funded by the National Science Foundation, this REU (Research Experiences for Undergraduates) was spearheaded by Doctors Meg Lowman, William Miller and Elzie McCord, three scientists who, fortunately for me and one other student, had the foresight to recognize that a wheelchair does not have to be a limitation to good field biology, and actively recruited participants with ambulatory disabilities.

This three-dimensional research project was designed to study tardigrade (water bear) ecology and determine insect herbivory in the underexplored North American deciduous forest canopy. A little known phylum of microscopic invertebrates, tardigrades are renowned in the scientific community for their ability to enter a reversible state of metabolic suspension, known as cryptobiosis, allowing them to live on every continent and survive environmental extremes that would kill most other life forms on the planet. What we know about tardigrades results from limited studies carried out solely at ground level, and it became our mission as summer interns to explore the canopy and learn about the density, diversity and distribution of these animals at varying heights among different tree species. We were also interested in learning about herbivory patterns, specifically the consumption of leaf material by insects, among various species of tree.

Guided by Tree Climbers International and Tree Climbing Kansas City, we began training the week we arrived, learning to check trees for safety hazards, tie knots, set our own lines and ropes and, once strapped securely into a harness, ascend into the canopy. After a spinal cord injury six years ago left me paralyzed from the waist down, I never dreamed I would be climbing trees again. Pulling myself up out of my chair for the first time, propelled higher and higher by my own strength and determination, was something truly extraordinary, and that sense of freedom and achievement only heightened with each subsequent climb.

Climbing was done in pairs, with one member of the team providing support and conducting research at ground level, while the other ascended into the canopy, collecting tardigrade habitat (moss and lichen) and leaves from predetermined zones along the tree. These samples were taken back to the lab, each team processing their own collection.

Over the course of a ten week period, and with the guidance of our mentors, we ended up climbing a total of 117 trees and extracted, identified and imaged more than 4,200 tardigrade specimens. We found tardigrades to be far more common in the upper reaches of the canopy than nearer the ground, and were elated to discover four species that are entirely new to science, allowing us to submit manuscripts for publication and expand our scientific knowledge of these extreme animals. We also processed nearly 2,400 leaves, with the preliminary results indicating that insect herbivory in North American temperate forests is not uniform between tree species, and concluded the internship by presenting our findings in the SECU Daily Planet at the North Carolina Museum of Natural Sciences.

The benefits of these experiences and discoveries reach far beyond manuscripts and newfound information. Auctioning off the naming rights for one of the new tardigrade species, we were able to raise a substantial amount of money for Dr. Lowman’s TREE Foundation, helping to protect the critically important, yet rapidly dwindling church forests of Ethiopia. On a personal note, it’s fair to say that this experience genuinely changed my life. It made me realize that I am far more capable than I ever gave myself credit for, and that a wheelchair does not define who I am, nor dictate my ambitions. I came to understand that the world is full of endless opportunities, and that there are people willing to go above and beyond to make those opportunities possible for anyone willing to try. 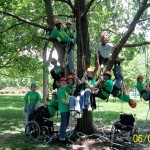 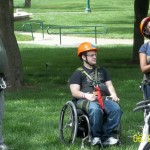 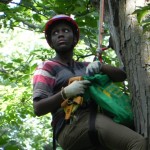 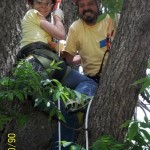 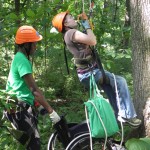 Ascending into the canopy, with Snousha Glaude. 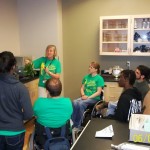 The students learn about herbivory from Dr. Meg Lowman. 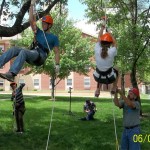 Chelsea Wallace and Snousha Glaude wait their turn while Brandon Haefke and Anna Spiers learn the ropes of tree climbing. 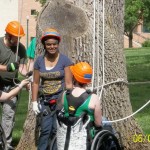 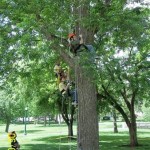 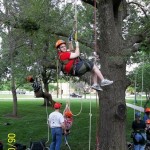 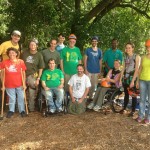 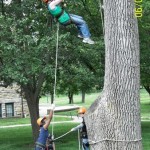 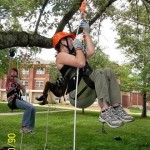 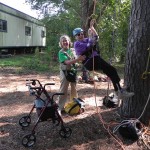 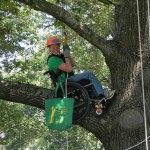 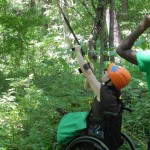 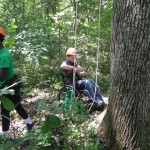 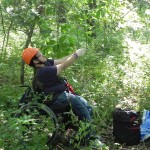 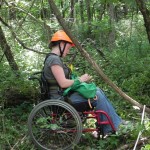 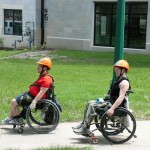