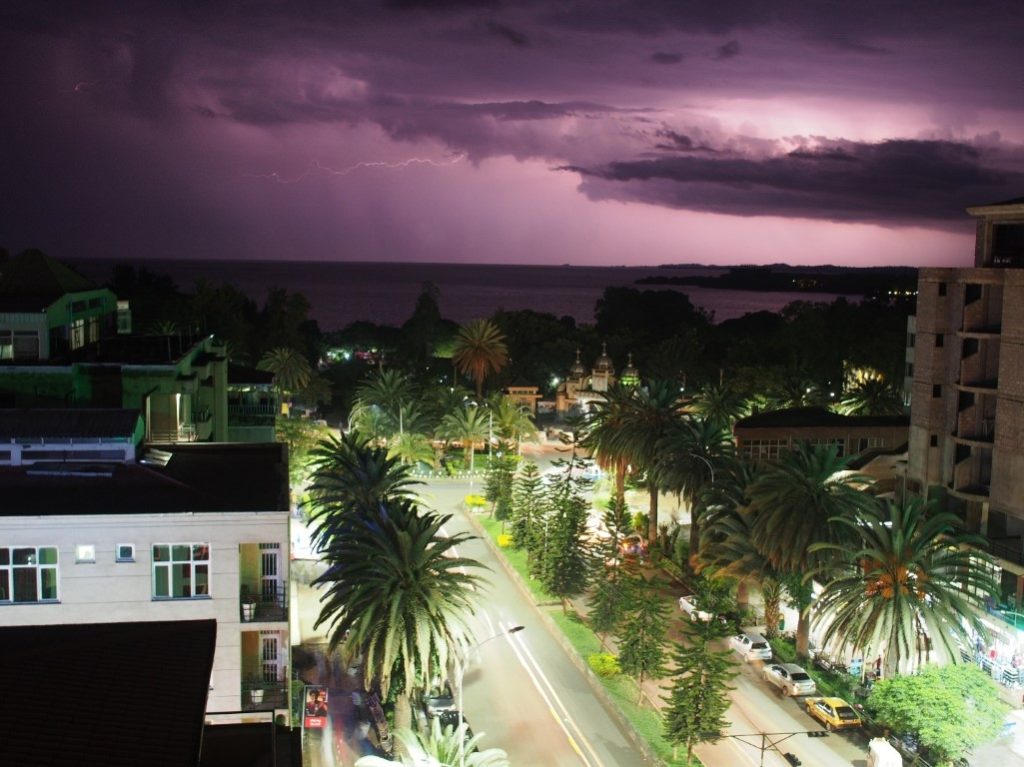 Lightning arcs over Lake Tana, as viewed from Bahir Dar.

We’ve now been in the field for about 2 weeks, and have visited 6 different church forests in the South Gondar region. Every day brings new discoveries, underscoring how much there is still to learn about the ecology of these ecosystems. As of this day, we’ve recorded over 150 observations of 9 species of herpetofauna across our 6 forest sites! We’re also collecting a lot of valuable information as we engage each community and learn more about their unique forests – and indeed, each forest seems to be quite distinct both in habitat structure and the species that inhabit them. 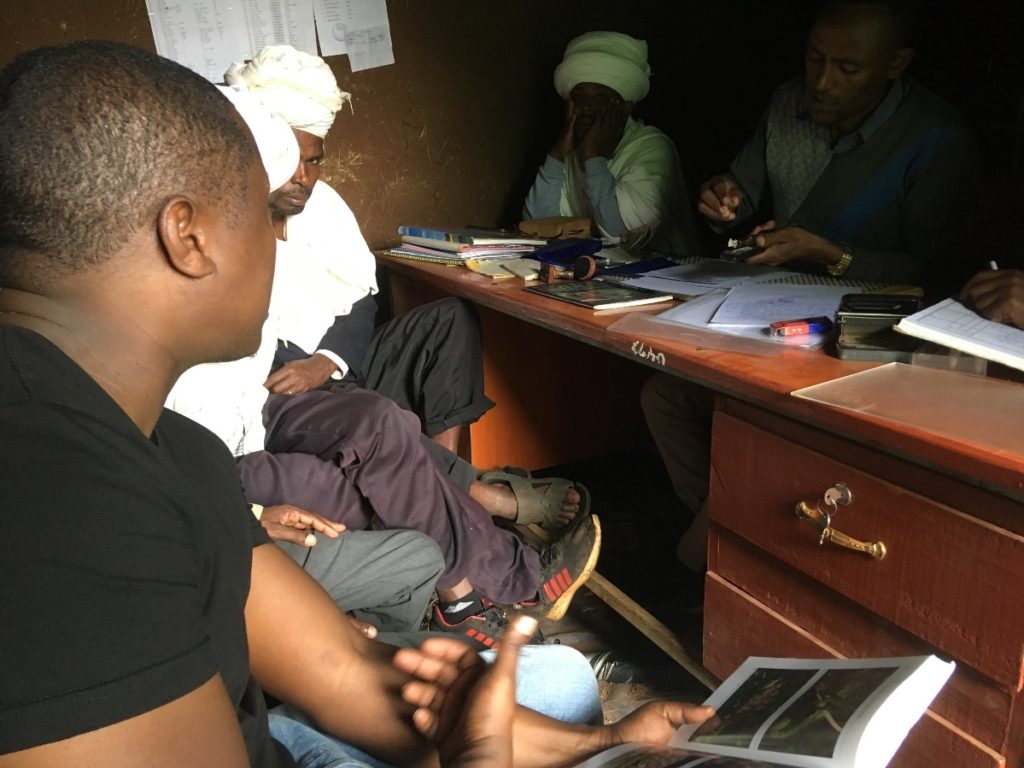 We talk herps to the priests at the Diocese office in Wonchet, as they prepare us a letter of introduction for when we visit new church forest sites.

We started our surveys with two sites near the village of Hammusit: Wonchet and Zhara. These sites are relatively easy to access (if you don’t mind jumping over a river for Wonchet), and have a history of being sites for research on a number of taxa including insects and plants. Despite that history though, we’re still making many discoveries in these sites – both for herpetofauna and other speices. We trialed pitfall traps at Wonchet, to see how effective they would be for capturing ground-based reptiles and amphibians. After 5 trapping nights and daily checks (including the occasional stop to join the forest feasts) we ended up with 0 herpetofauna, however, we did find several small mammals in our traps including a shrew and vole. We let these little guys go, and decided to dismantle the traps to prevent any stress or deaths to any of the animals in the forest. We’ve been having a lot of success running simple visual encounter surveys around the forests, so we decided to focus our energy there instead and expand the number of sites for our surveys. 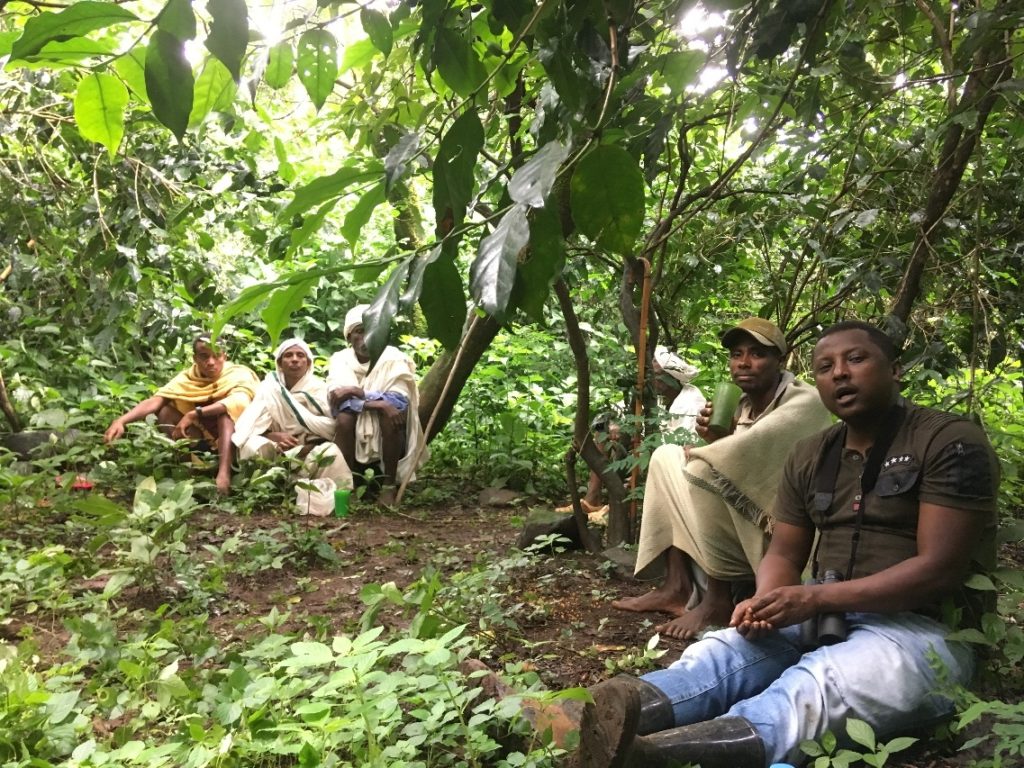 The forests become alive with people every other Sunday for communal feasts that are a center of village life. After checking our trap-line we partook in some dried chickpeas and tella in Wonchet. 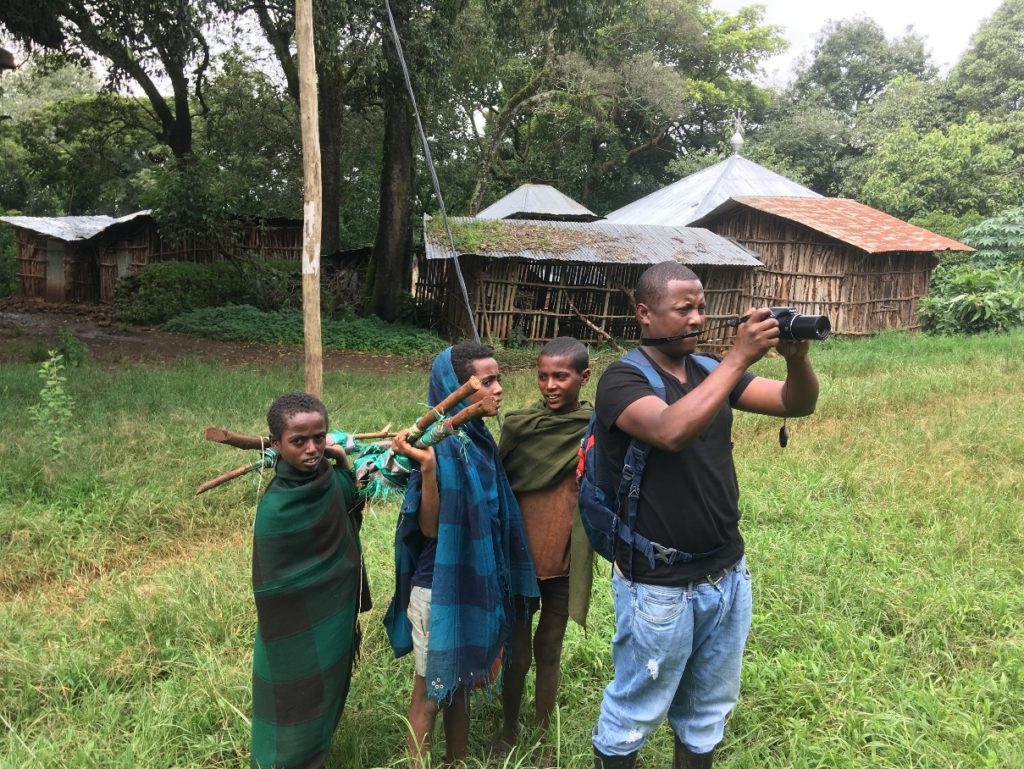 Even amidst work, we usually take time to stop for birding breaks. 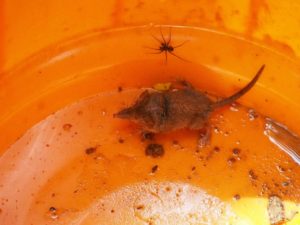 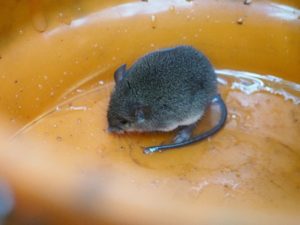 A shrew and vole from our pitfall traps in Wonchet. Both were released unharmed.

We’ve shifted our attention to 3 other sites: Gibsayit, Zajor, and Woje, and interestingly they are all highly unique in both forest structure and the biodiversity. 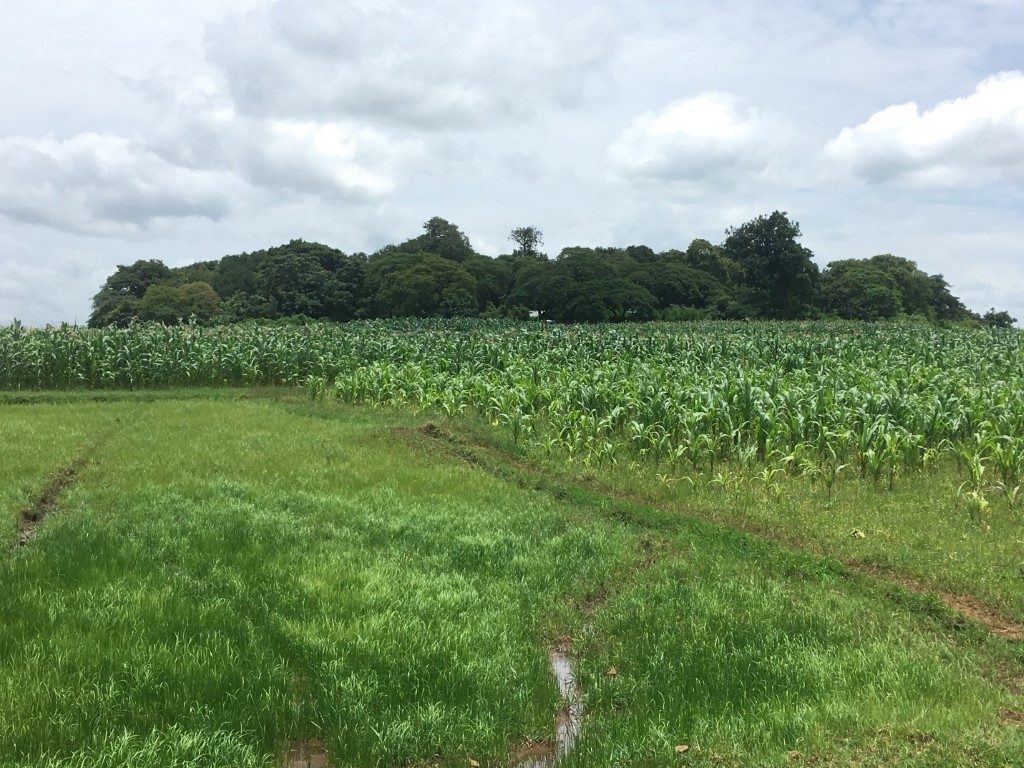 Gibsayit church forest emerges like an island in a landscape of finger millet and maize.

We’ve spent 3 days surveying Gibsayit, cataloguing species encounters and measuring canopy structure, and this site is absolutely rife with frogs! So far we’ve logged dozens of occurrences for one particularly abundant species: the Ethiopian dwarf puddle frog, which is found on the edge of agricultural fields and more often nearby the stone walls constructed by the TREE foundation. Indeed, walking along the walls the grass buzzes with activity as frogs scramble towards the safety of the stone walls. This is quite interesting, as it suggests the walls are indeed a key microrefuge for this species. I suspect that the walls also retain a lot of water (it rains very reliably each night, but the days are typically hot and dry!), creating an ideal microclimate for these small frogs to escape into. We’ve also found potentially two other frog species in this site: both members of the Ptychadena (possibly P. anchietae and P. telinii), which are hard to differentiate and known for having many cryptic (ie. hidden) species – so our DNA samples may come in very handy here. It’s also quite interesting to see the other species that may be foraging for these frogs including Woodland kingfishers and a group of the very large (and impressive) Abyssinian ground hornbills! So it seems quite plausible that these frogs are a key part of the food web in these ecosystems, and the stone walls may be greatly benefitting their overall abundance and biomass! 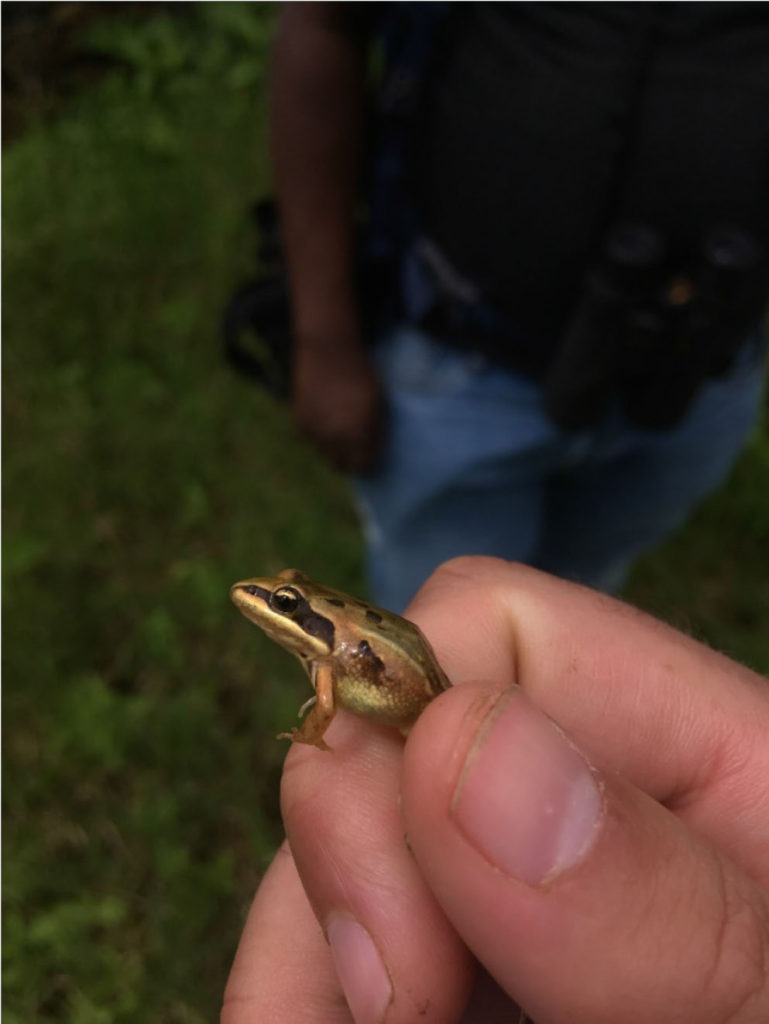 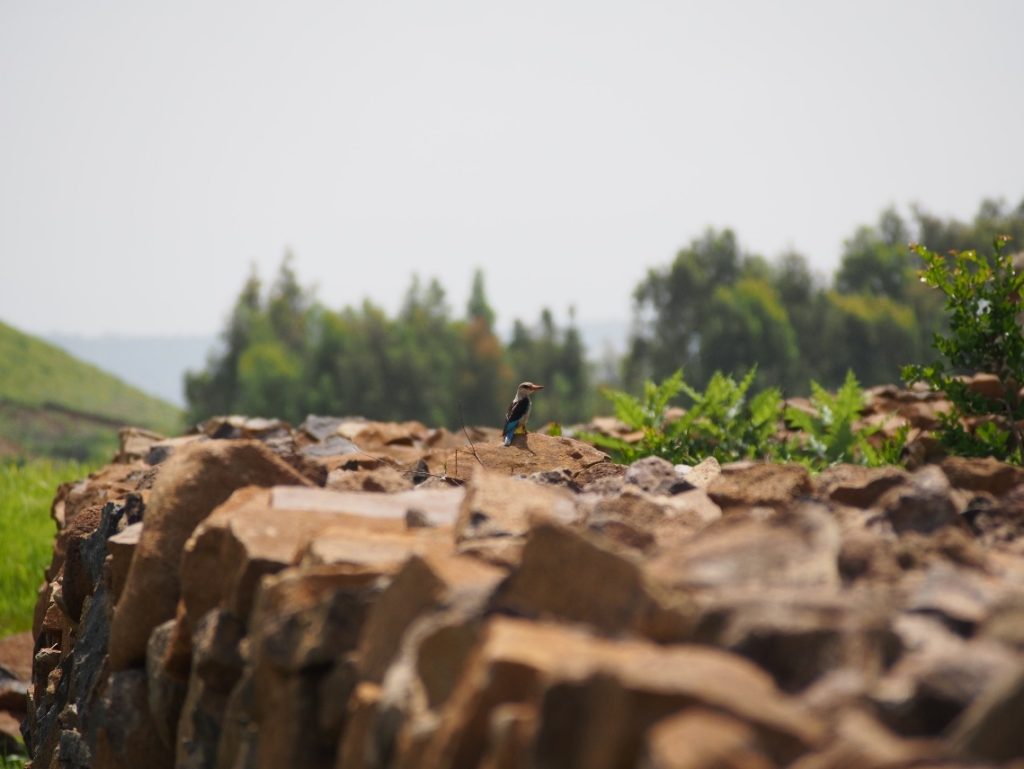 A woodland kingfisher (Halcyon senegalensis) perches along the stone wall at Gibsayit. 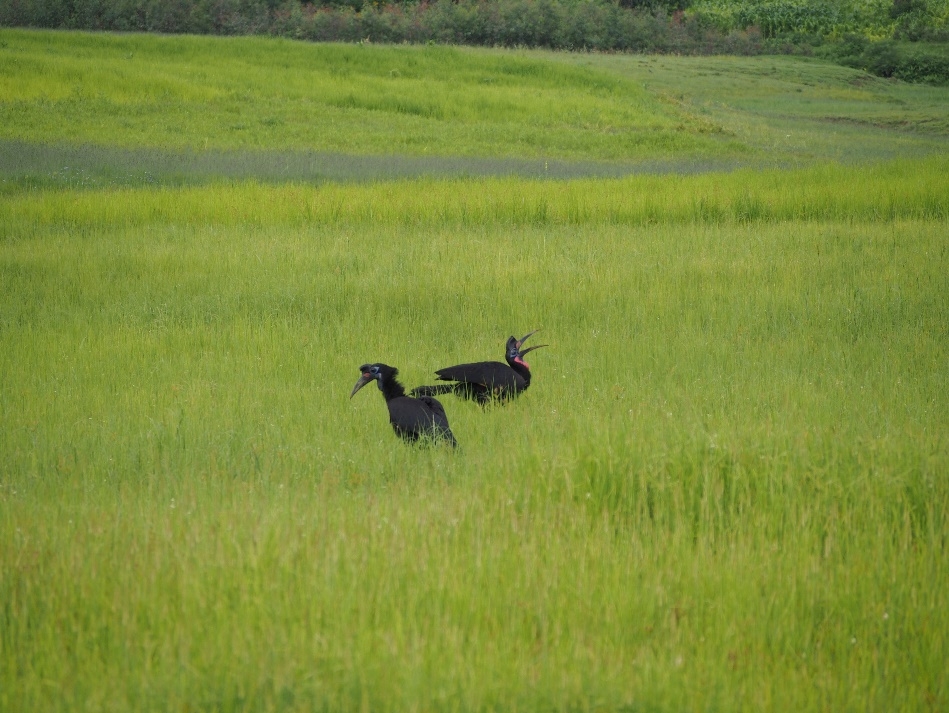 To get to Zajor, we have to travel along many kilometers of bumpy and muddy road and then hike in about 1 hour through some truly beautiful scenery. Accessing this site is like stepping back into time, as we get a glimpse of deep rural Ethiopia and a way of life that’s probably existed for thousands of years here as we pass through farmer’s fields and small villages. We were welcomed with open arms in these sites, as priests and villagers were very hospitable and eager to join us on our surveys and regale us with tales of the animals in the Zajor forest. Interestingly, several people told us that a species of gazelle lives in the forest (these have been driven to extinction across most of the Amhara region due to hunting and habitat loss), in addition to bush duikers (which we also observed at Wonchet). If true, this would be a pretty significant finding for the region. Indeed, we hear a lot of from people in each forest about curious sightings – including a mysterious leopard at Wonchet (which I suspect may be the secretive, endemic, and somewhat leopard-esque, Abyssinian genet). While I believe the sightings we hear from these people who spend so much time in these forests, it would be really great to have hard evidence of these species – which may make for a really intriguing future project for a mammal specialist. 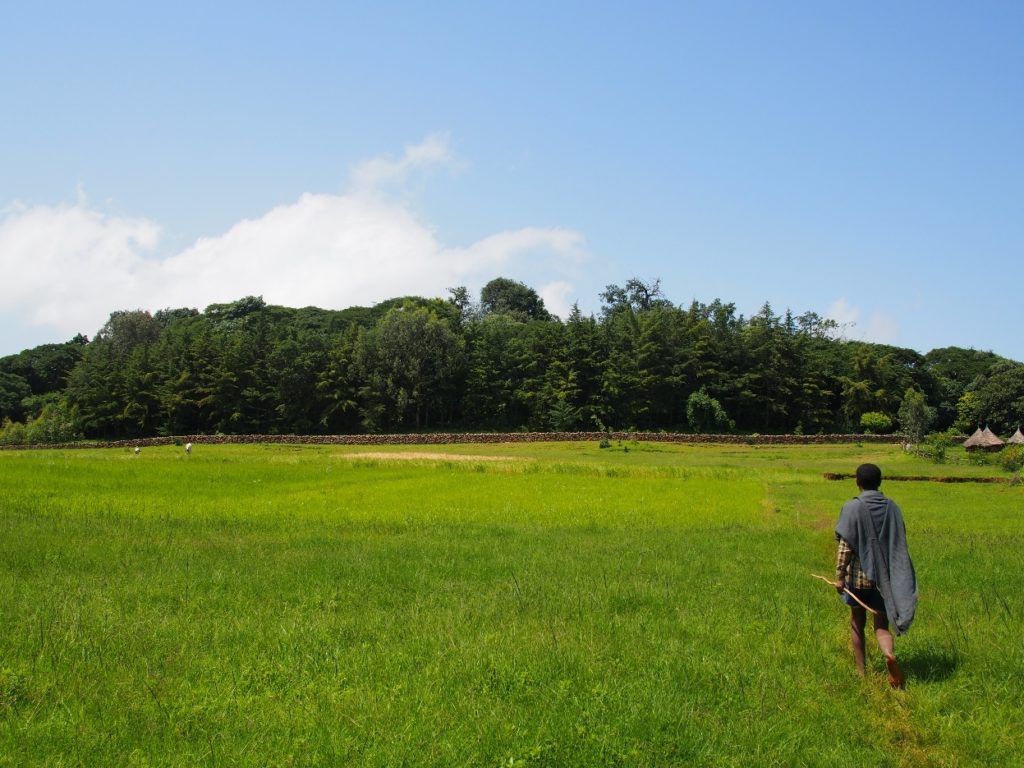 A priest leads us to the church forest of Zajor. 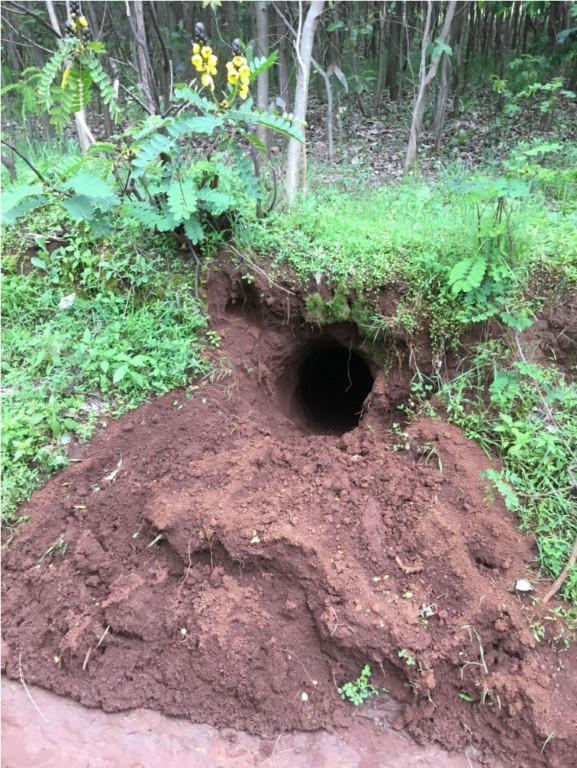 The den of a mysterious mammal the locals call “Faro”, possibly an aardvark (they describe it as a termite eater) – but from pictures they claim it is not this.

The wall at Zajor is very new, being completed in the past year – and interestingly, we haven’t found nearly the same abundance of reptiles and amphibians at this site as in the others. It may be that colonization of the stone walls takes some time. We did find one Issel’s skink, and spotted a Ptychadena that quickly escaped into the forest brush, but there’s not nearly as many individuals (so far) as at the older walls in Zhara and Wonchet. So this adds another intriguing bit of evidence into how the ecology of these systems progresses. We’re continuing our surveys in this forest, so we may discover a greater diversity of species as we keep returning. 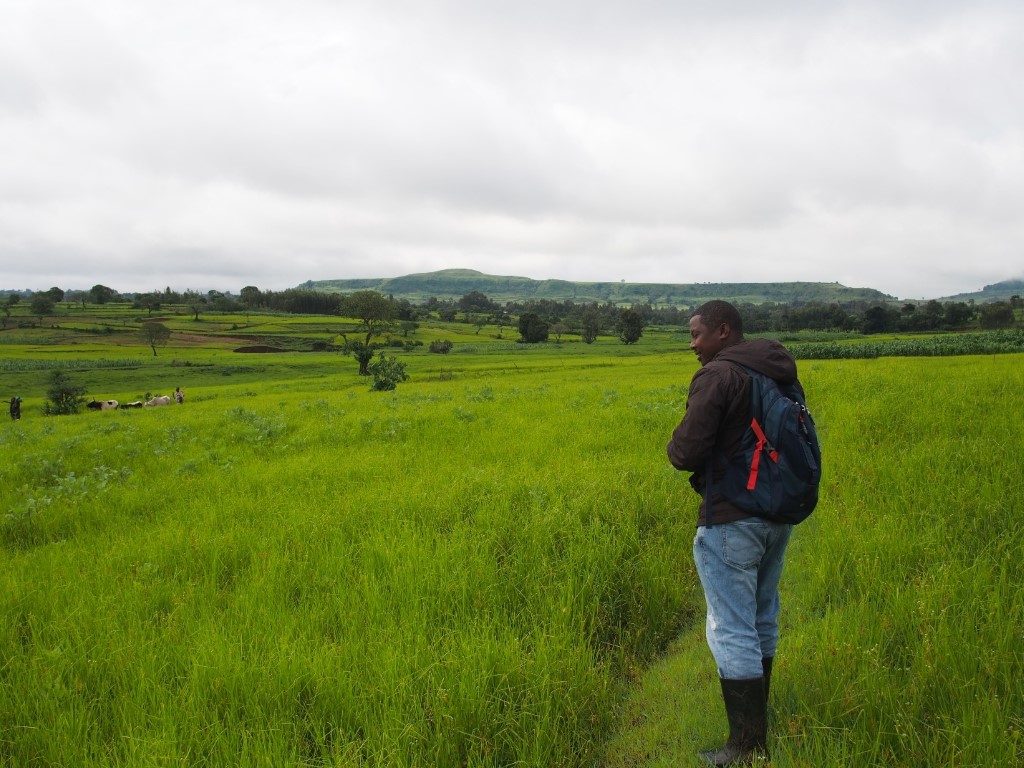 Hiking through the rolling landscapes of rural Amhara, not a bad way to start your day of work.

Finally, the church forest at Woje is very interesting and we’ve focused our surveys on this site in the past two days. First, this site is quite a bit farther away than our other sites, but it is situated near the vast Fogera wetland and rice agricultural area. This seems to mean that a very different fauna exists at Woje. Indeed, we’ve found 8 amphibian and reptile species at this site alone! I’m still working through the exact species identities of several of them (many of the species here are highly variable, so it can take some sleuthing to nail down the identity), but regardless this site is really exciting to work in. We’ve already gained a reputation amongst the villagers of Woje – particularly as the children have lapsed in their cattle tending duties to instead join us looking for lizards, snakes and frogs! We’ve taken this opportunity to pass on knowledge about the local species, and how and why we do science. One interesting experience was when I captured a (harmless) Hissing Sand Snake (Psammophis sibilans), which of course solidified my reputation as a crazy farenji (foreigner), but was also a good opportunity to teach these children about snakes. The cultural norm in Ethiopia is to kill any snake on sight, which of course is really unfortunate as most snakes here are not venomous and are important players in the ecosystem (not to mention any intrinsic moral value, which is a concept that’s going to be even more difficult to communicate). So hand capturing a live snake, observing it, and releasing it, shows a very different way of interacting with these animals for these kids (indeed, they were quite wide-eyed). We tell them that they should just leave snakes alone and let them live their life, and hopefully these sort of encounters may slowly change the cultural attitude towards snakes here. It’s a tricky situation of course, as people do encounter and get killed by venomous snakes. But by and large, if you just leave snakes alone, then it won’t be a problem. 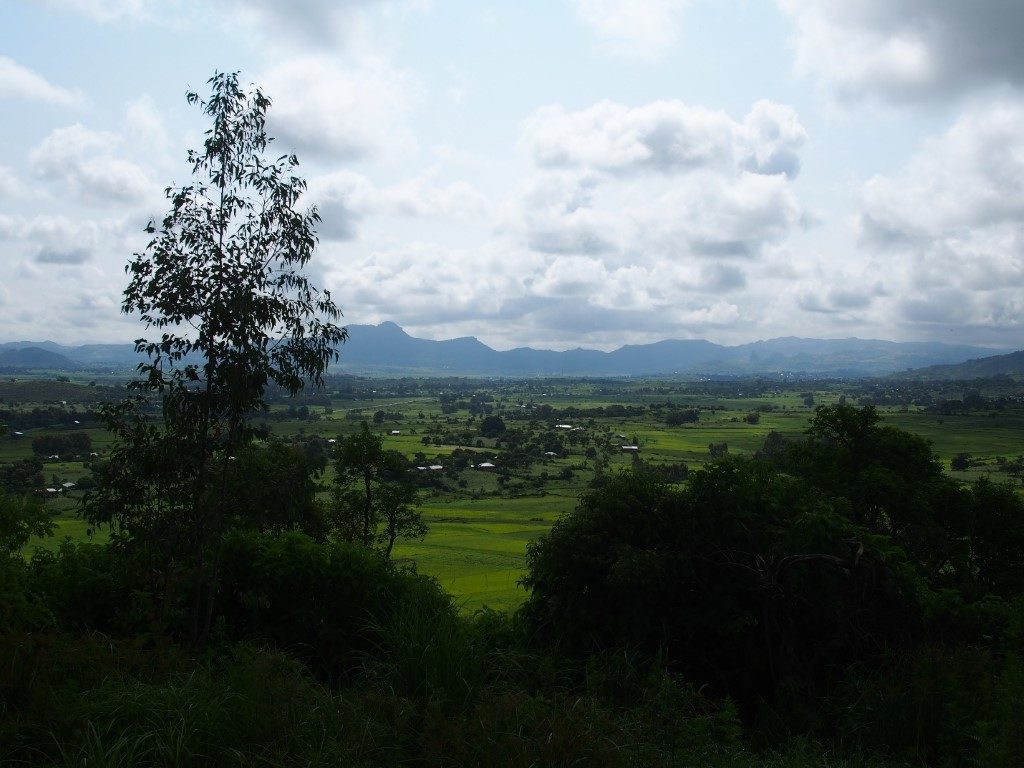 The view from atop Woje. 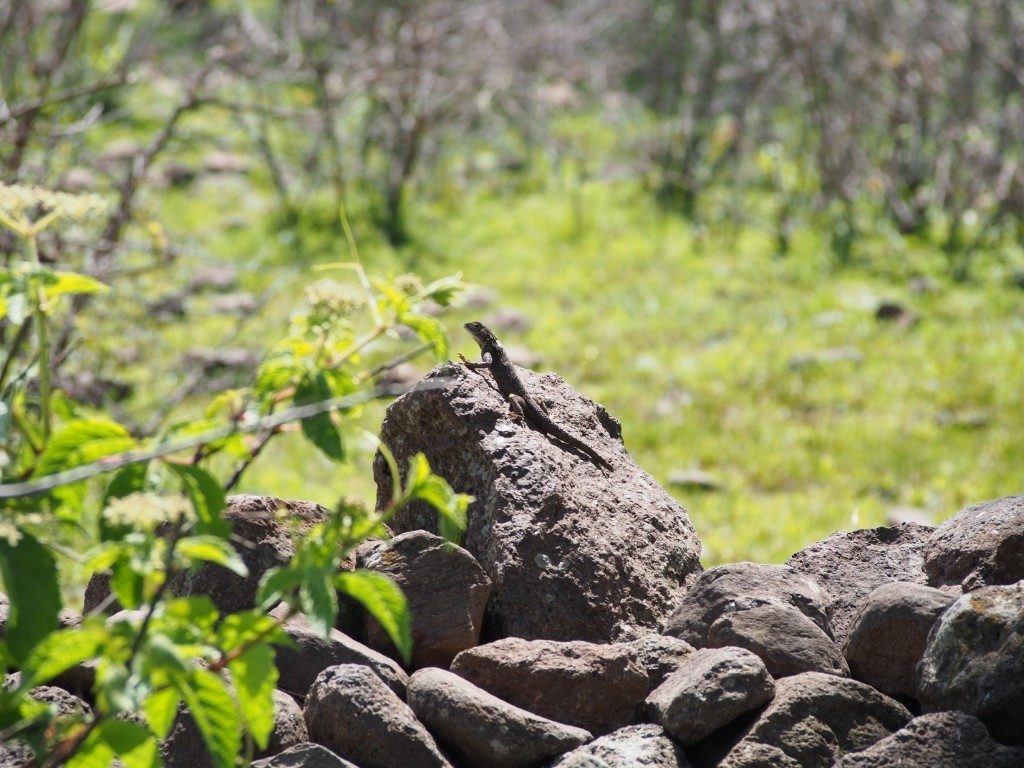 A very exciting find (for me), Doria’s agama (Agama doriae) sits atop the stone walls at Woje. 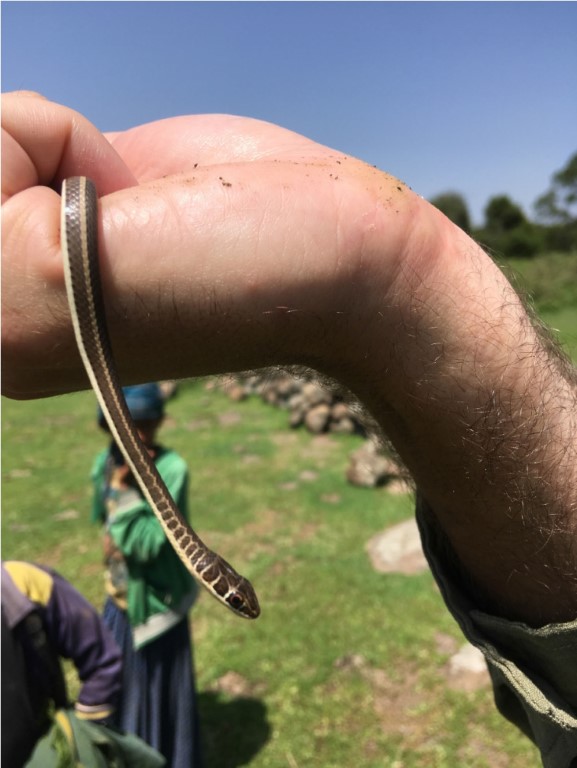 If you want everyone to question your sanity in Ethiopia, just catch a snake (and then release it). Here the harmless Hissing Sand Snake, Psammophis sibilans. 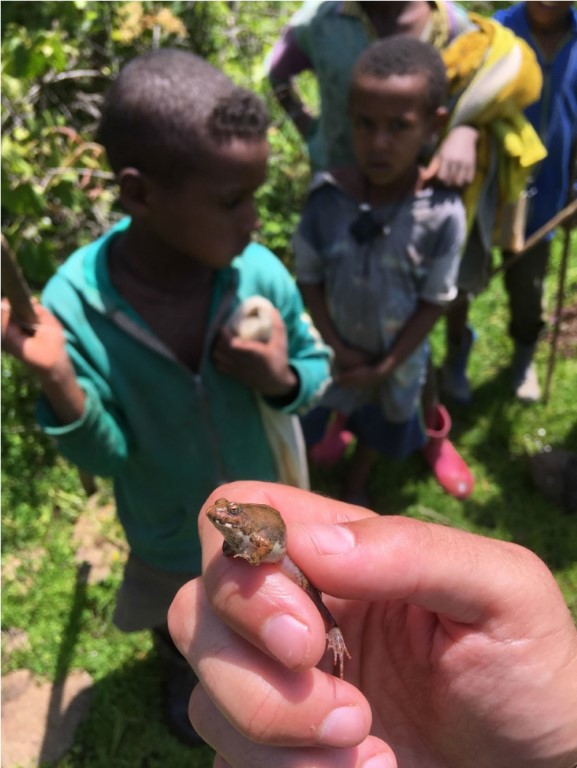 After the “snake incident” the kids starting finding us frogs (like this Natal Puddle Frog, Phrynobatrachus natalensis), so perhaps appreciation of nature’s oddities is infectious.

We have about 9 more days in the field left for my trip here, and we’ll be shifting towards nocturnal surveys and some follow-up surveys for our remaining sites. Night surveys have been something we’ve been trying to arrange since I arrived here, but unfortunately there’s a lot of suspicion about entering the church forests at night. This is largely because of some rather unfortunate occurrences here where foreigners have actually been looting artifacts from churches – and in turn, the diocese have advised all the churches to not allow strangers to enter the forests. This has caused us some difficulty when approaching new church forests, but after we explain our purpose and show some supporting letters from Dr. Alemayehu and the diocese in Hammusit, we usually get our foot in the door relatively easily. However, it still takes some coaxing to allow the guardians of the church to let us into the forests at night, but it looks like this will go ahead for at least Zhara and Wonchet. We hope that we find a whole new retinue of nocturnal species as a result, so stay tuned. 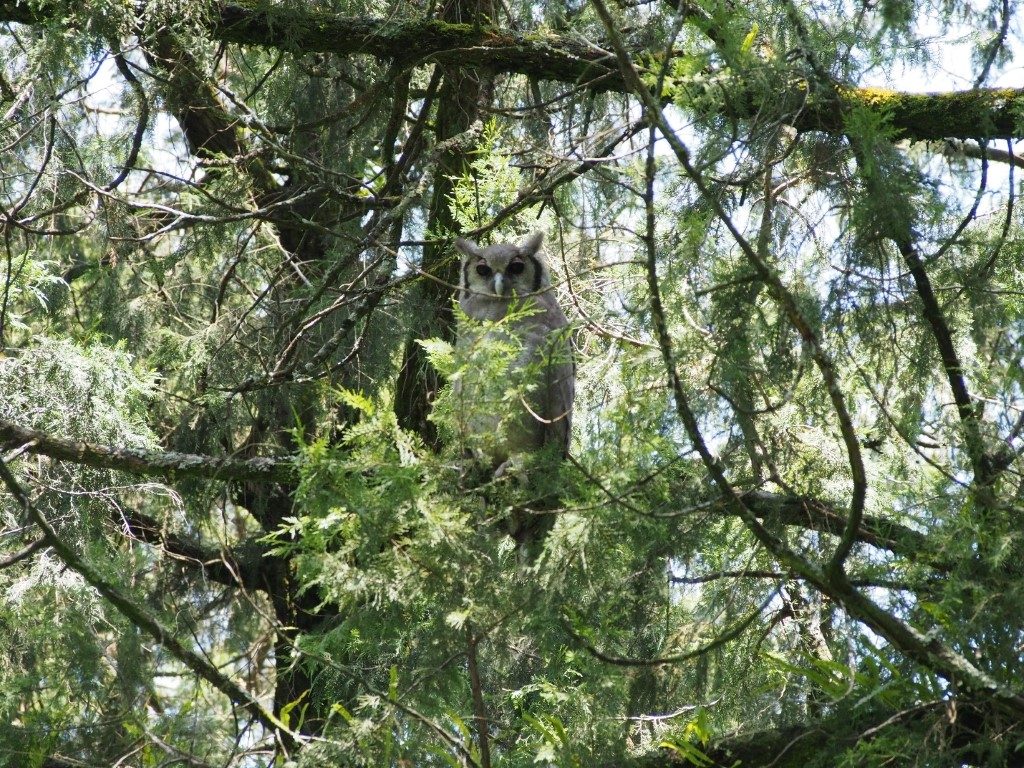 The resident Verraux’s eagle owl of Woje! We found her twice in the same thicket of Juniper.