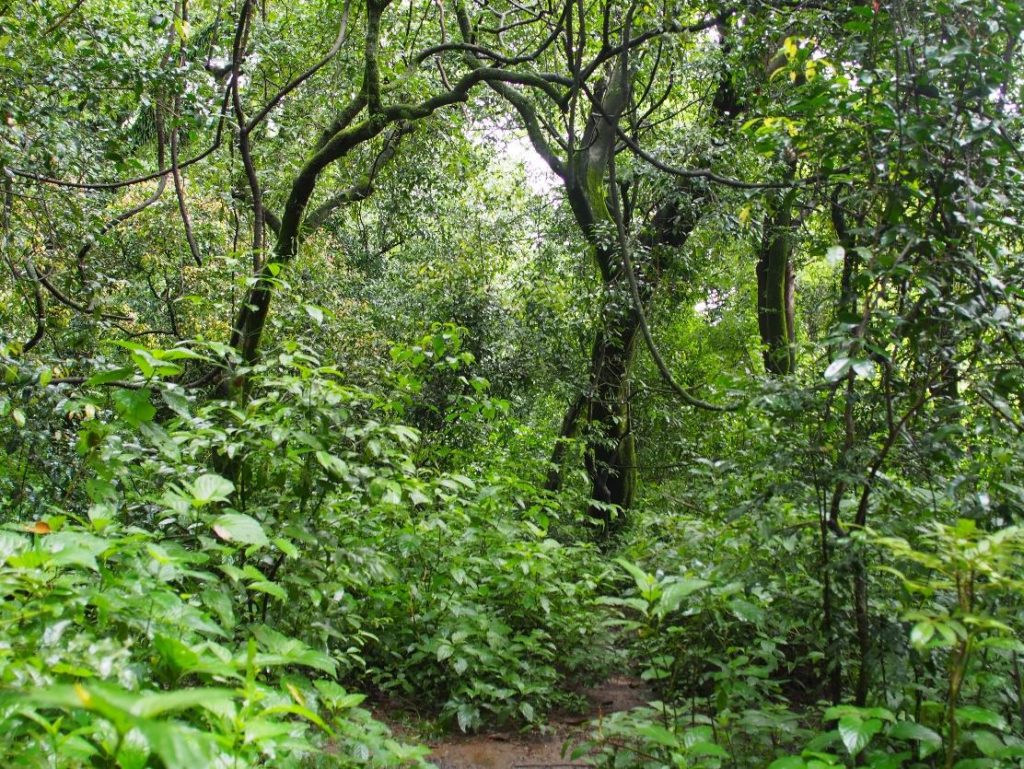 Inside the forest at Wonchet

Arriving back in Bahir Dar, Ethiopia, I was struck by the transformation of the landscape relative to my last visit in the dry season. The barren red soil that once dominated has been replaced with lush green carpets of grass, wildflowers, and burgeoning croplands. I’ve come here to survey the amphibian and reptile biodiversity in the church forests around the South Gondar region. Working with colleagues Dr. Alemayehu Wassie, Dr. Meg Lowman, and Tegistu Adane, we’re assessing how stone wall construction to protect the church forests from livestock grazing and agricultural encroachment may also serve as valuable habitat for many species. 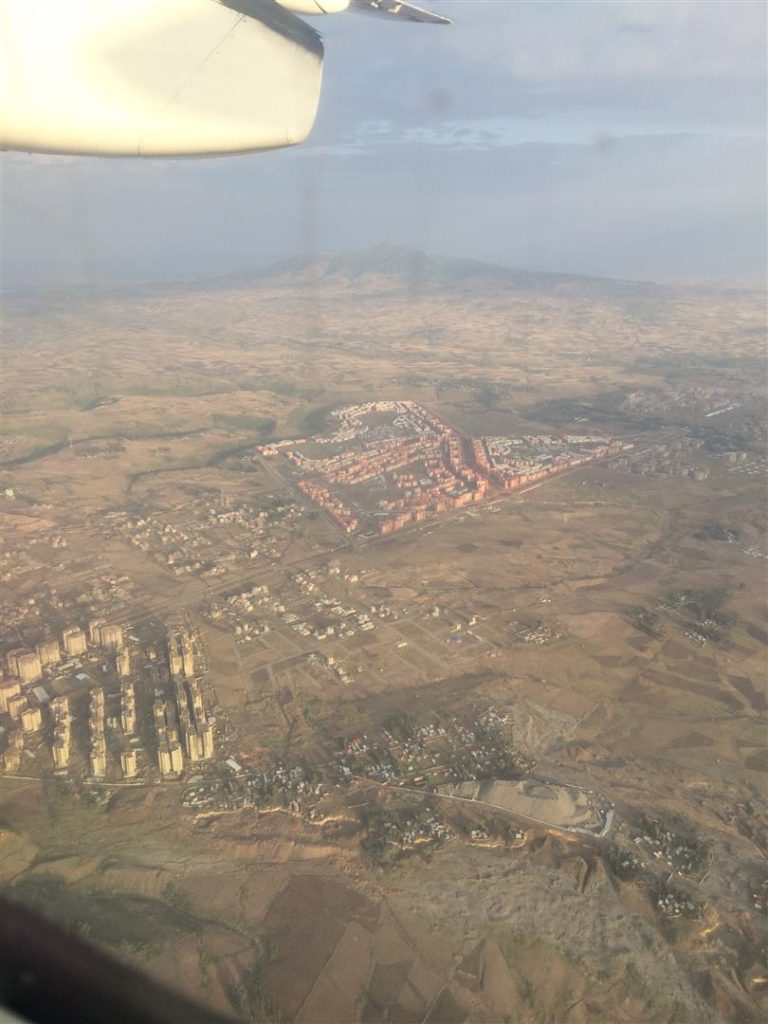 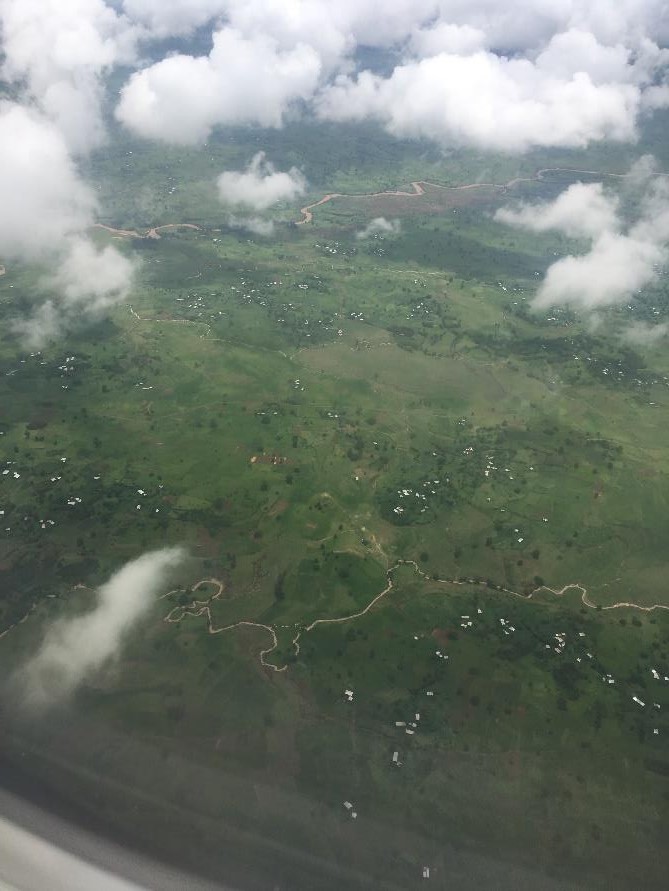 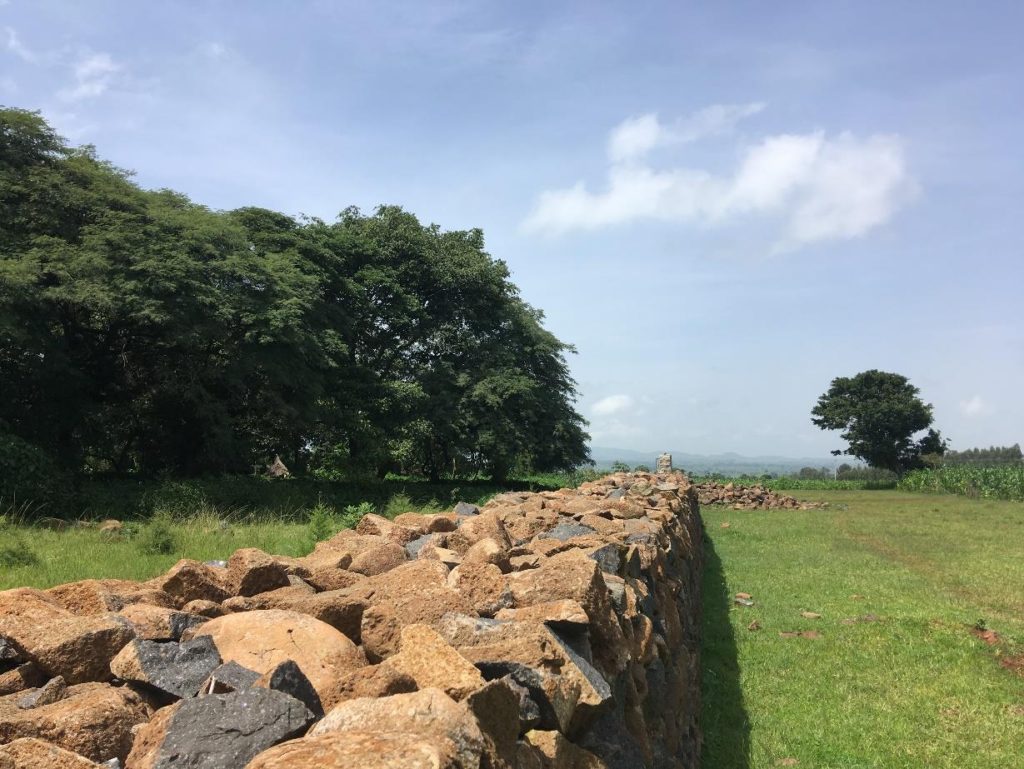 To that end, Tegistu and I have been conducting herpetological surveys along the stone walls and in the forests, and trialing some pitfall traps and drift fences in four church forests sites: Zhara, Wonchet, Gibstiwat and Robit. We’ve documented a plethora of biological diversity in and around the forests, recording birds, mammals, and of course our targets: lizards, snakes, and frogs. Naturally, our activities draw a lot of attention (mostly good though!), so a big part of each day is science communication with priests, farmers, and villagers who are curious about what we are doing. It’s been amazing to see how captivated many people become once we explain why are here, and show them some photographs of species in our bird and herpetofauna guides, and then I like to show them photographs of some of the species we have found. 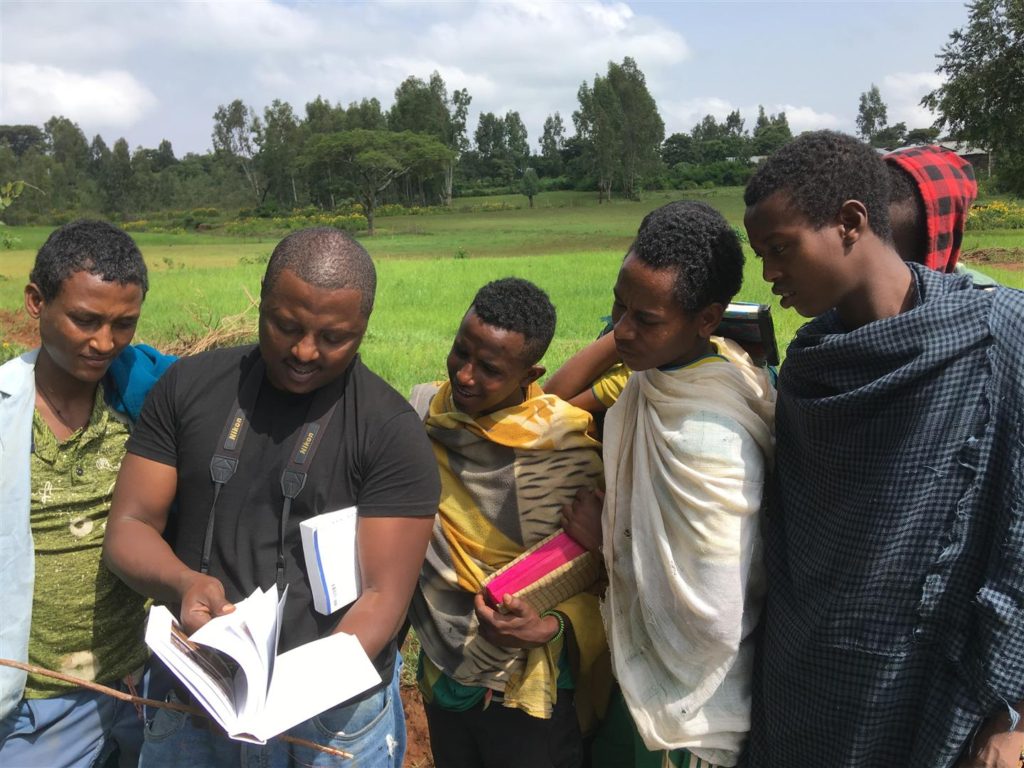 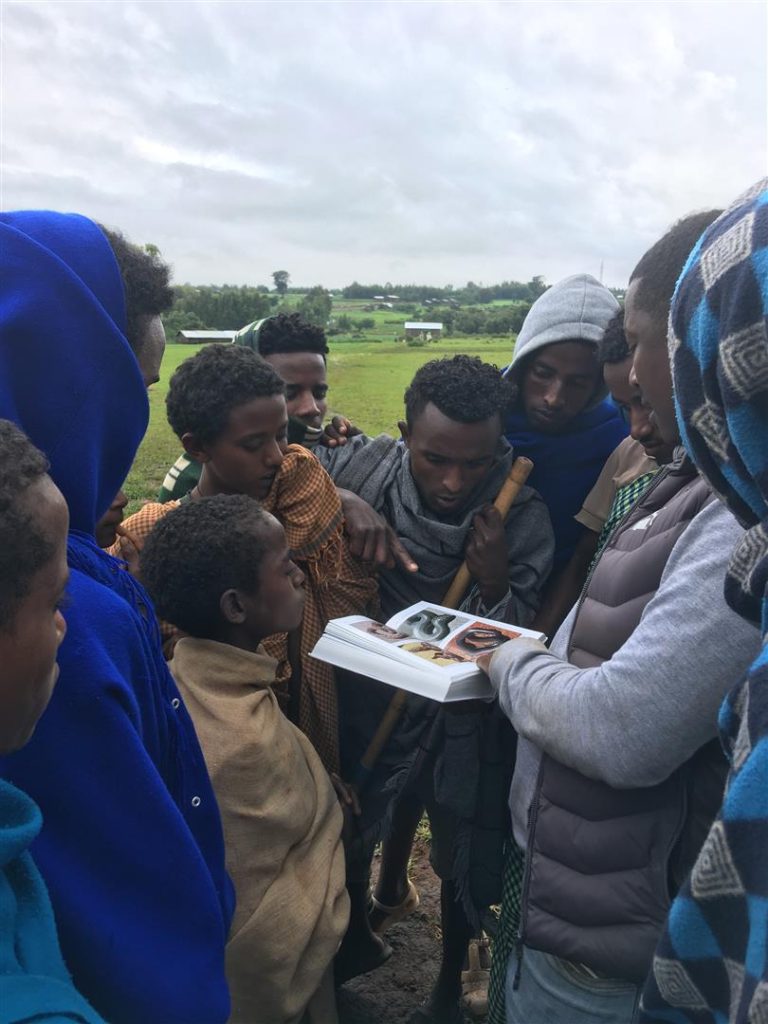 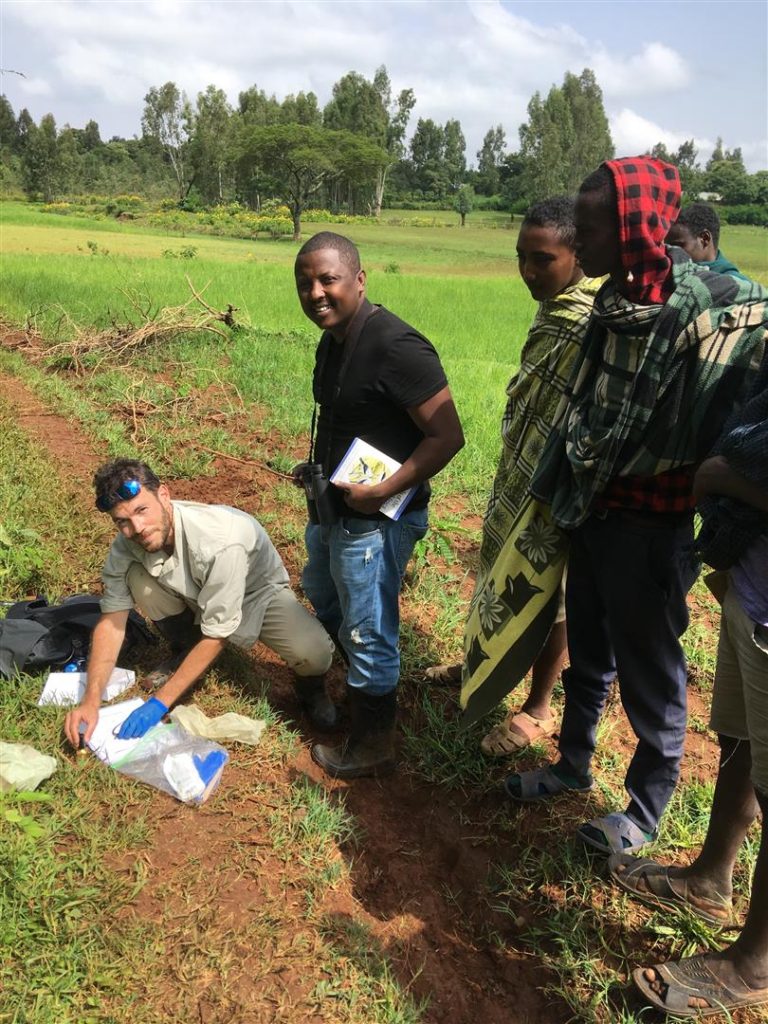 Sometimes people want to get involved too, and it’s not unusual that we have a small crowd and sometimes some additional field assistants. While piloting our trap arrays, we recruited four priest students (Berza, Tegistu, Tseghe, and Tseghuy) who have been dedicated field hands ever since — in addition to helping us set up the traps, they dutifully monitor them and make sure they are well guarded. We often get tips from the people who live in these forests about what animals they’ve found there. For instance, we stumbled upon a Bush Duiker (Sylvicapra grimmia) one afternoon during our surveys at Wonchet and subsequently were informed by the priests that sometimes they see groups of up to 4 duikers at a time there and that duikers are present in many other forests (Zhara, Wonchet, and Gibstiwat). This adds another mammal to our list, including the rock hyrax and vervet monkeys, which find refuge in these sacred forests. 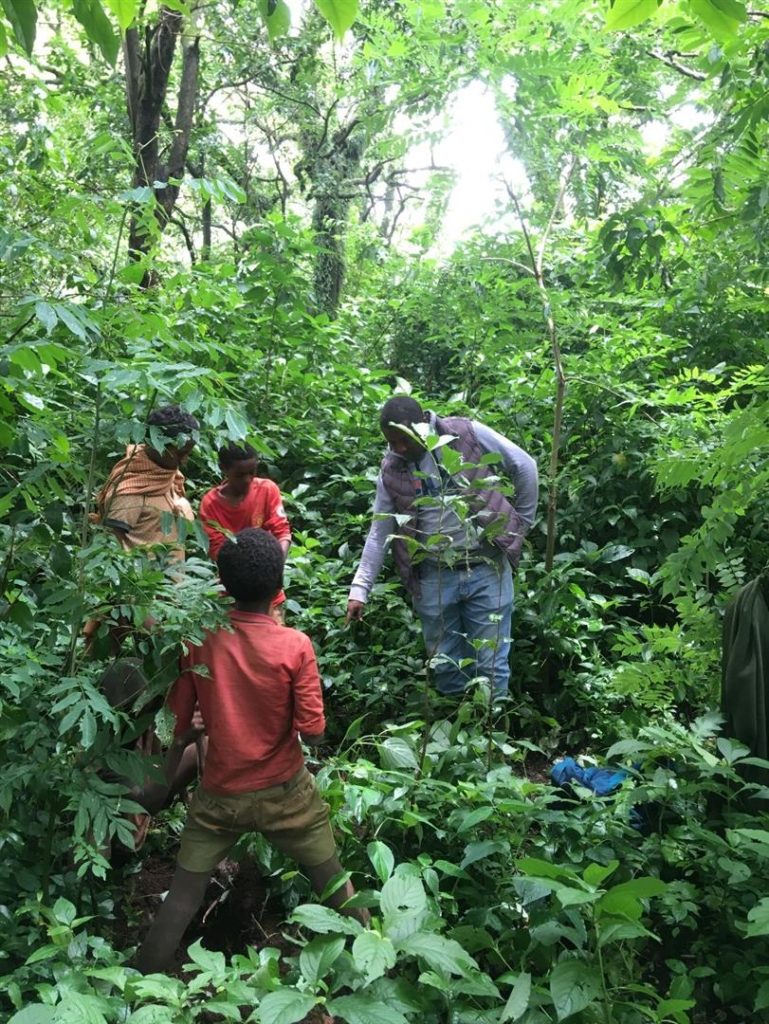 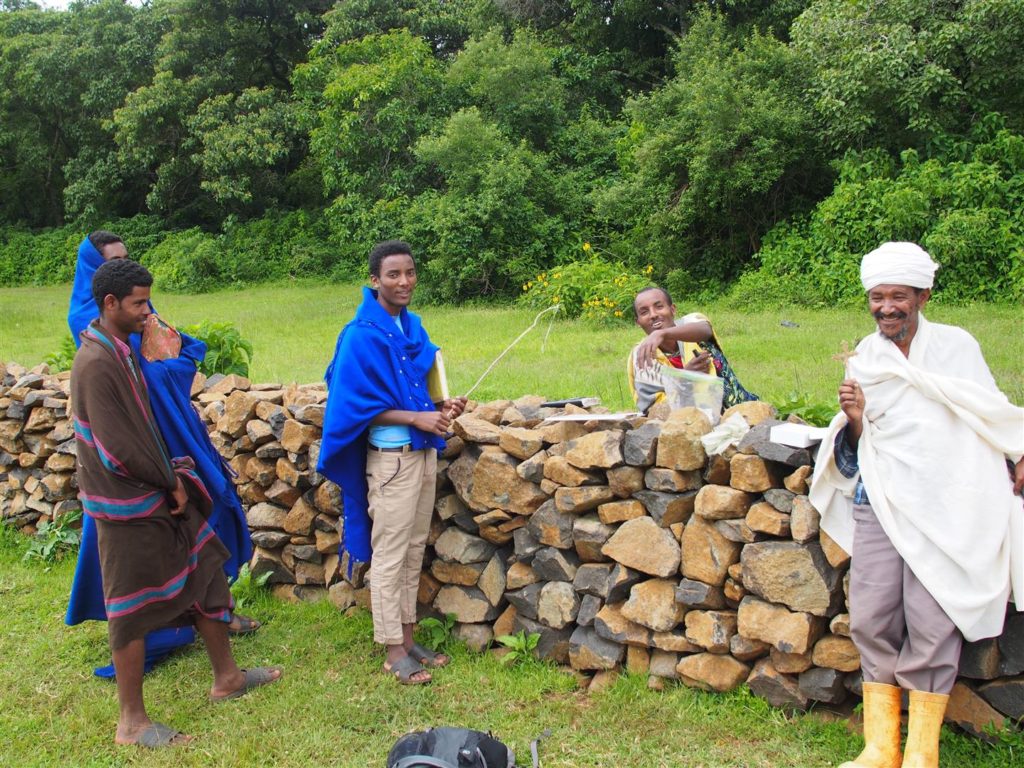 Priests and students help us catch and process lizards at Wonchet 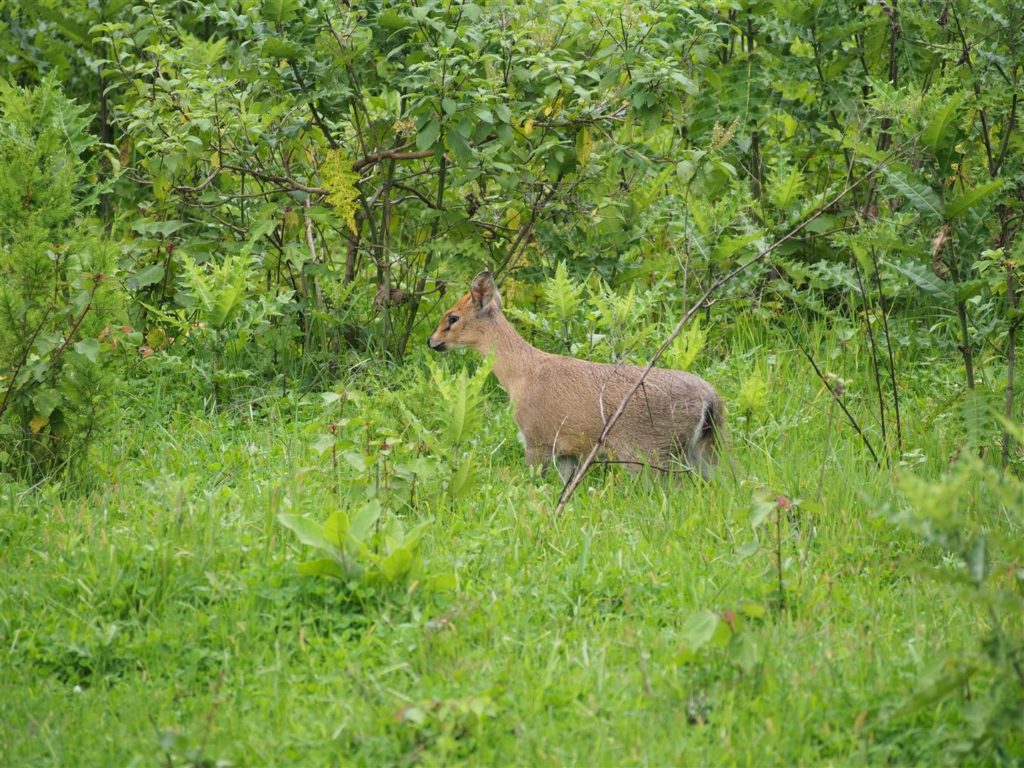 Our surveys of the stone walls have been finding a lot of amphibian and reptile species that we’re first recording in the church forests. Our protocol is to slowly walk along the outer walls, looking in the cracks and crevices for any signs of life. When we encounter any individual, we record its GPS location and identify it to species – when it’s something new we make sure to take many photographs. So far we’ve found a lot of herpetofauna taking refuge in the church walls – recording up to 37 lizards in a single visit! Each survey seems to come up with some new observation too, over the past 5 field days we’ve recorded over 100 counts and discovered 5 frog (n = 1), lizard (n = 2), and snake (n = 2) species using the wall as habitat. The walls are typically dominated by two species of Trachylepis skinks: Trachylepis isseli and Trachylepis wingatii. Interestingly, both species are endemic to Ethiopia and they appear to achieve very high densities on the walls – likely due to the abundance of insects it attracts and the natural habitat it creates for these species. We believe in turn this high density of lizard likely attracts both predatory birds (we find many skinks with dropped tails, which we also record) and lizard-eating snakes including the Brown House Snake (Lamprophis fuliginosus) and the Hissing Sand Snake (Psammophis sibilans). In this way, it seems like the positive effect the stone walls have on the lizard populations likely cascades up into the rest of the ecosystem by supporting a robust diversity of predators. 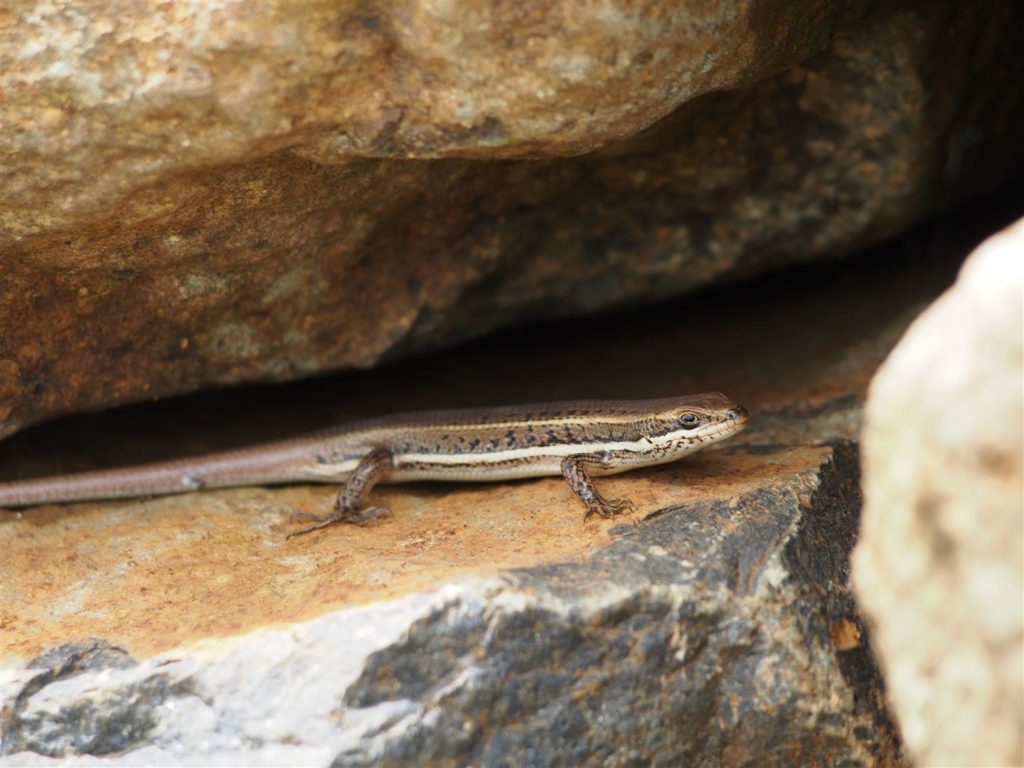 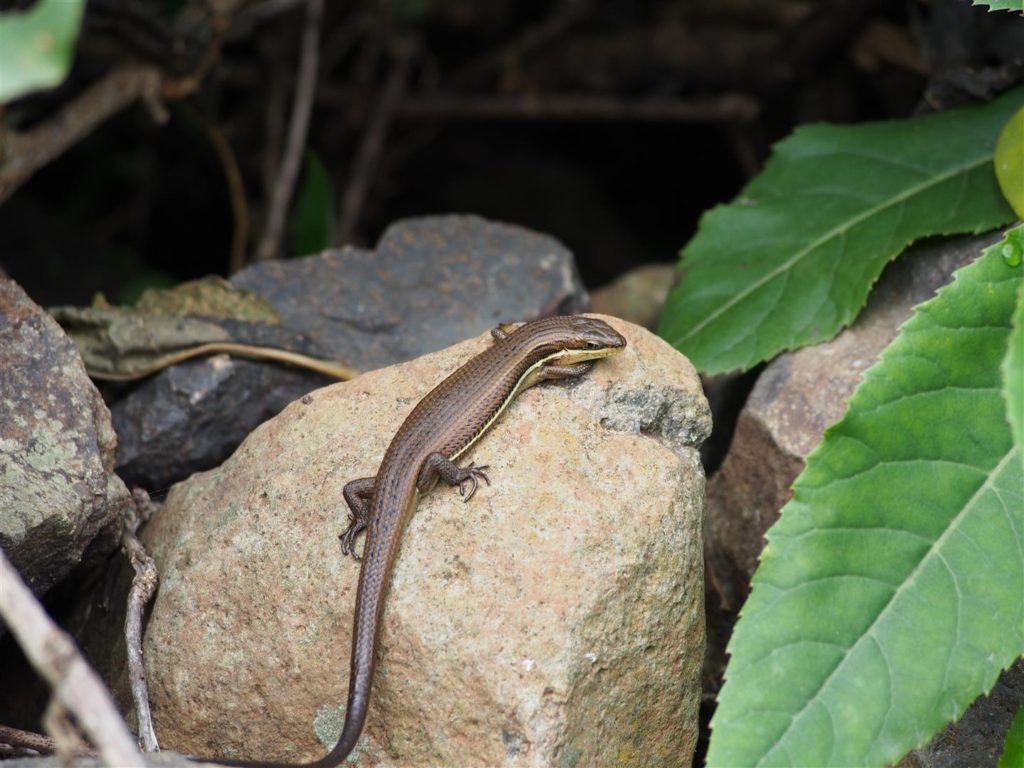 Wingate’s skink, Trachylepis wingatii, looks on suspiciously from atop the church wall as we approach 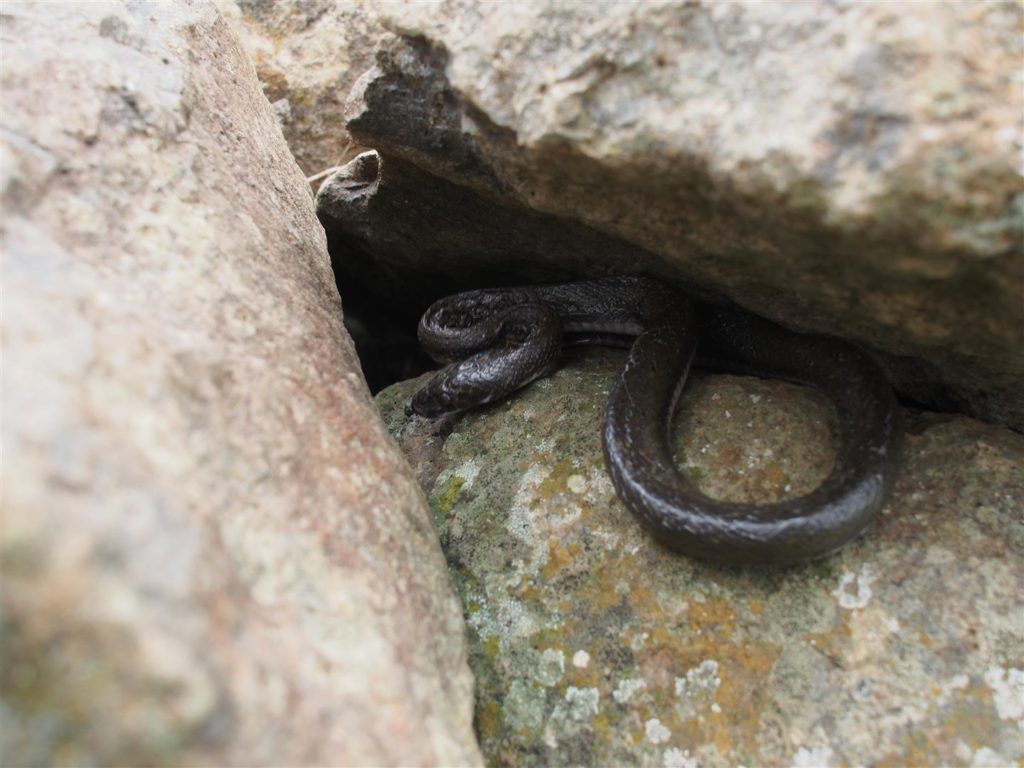 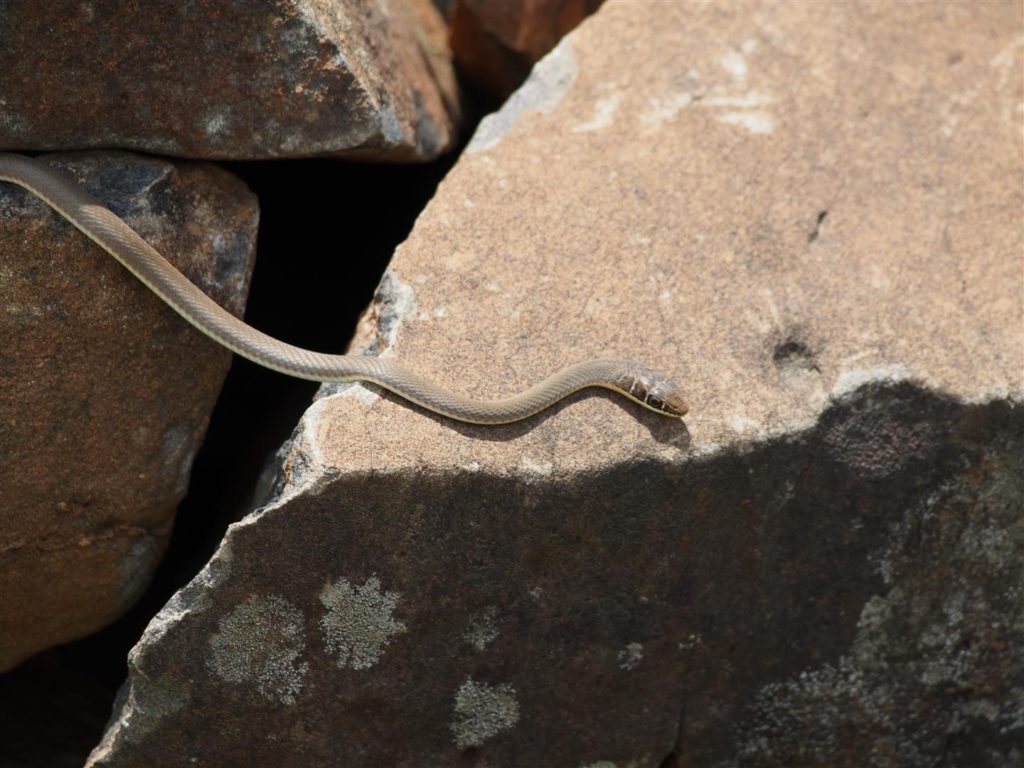 The Hissing Sand Snake (Psammophis sibilans) was very quietly resting amongst the stones of the church wall at Wonchet, likely looking for lizards to eat!

In the past two days of field surveys, we’ve also been finding very tiny frogs associated with the stone walls: the aptly named Ethiopian Dwarf Puddle Frog, Phrynobatrachus minutus. This tiny frog is also endemic to Ethiopia, and it is truly minute and easily mistaken for a small cricket. Interestingly, they seem to benefit from the stone walls that similarly serve as natural habitat and a refuge from the surrounding desiccating conditions of the cleared agricultural fields.

The aptly named Ethiopian Dwarf Puddle Frog, Phrynobatrachus minutus, takes refuge amongst the stones of the church wall at Gibstiwat 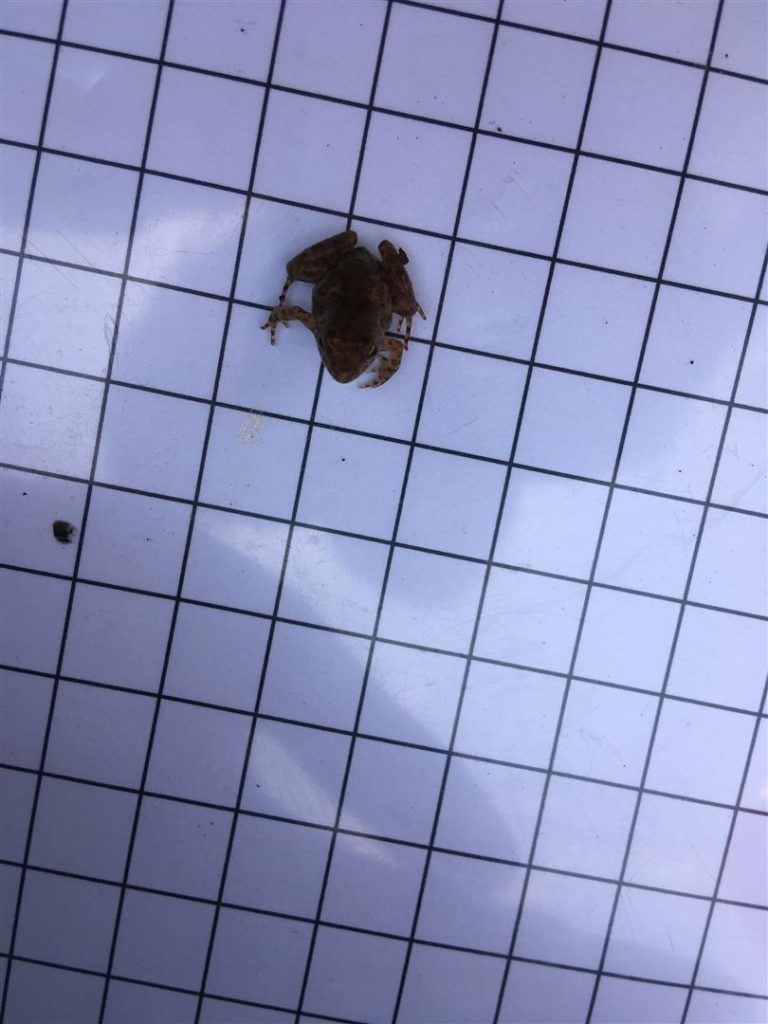 To give a sense of scale, each grid is 1x1cm! Truly a tiny frog.

During our surveys, we also take time to catch some of the species we find to sample their DNA – which we hope to ultimately sequence to provide vital molecular sequence data for these species that are often endemic or may represent uniquely isolated populations from their broader ranges across Africa. 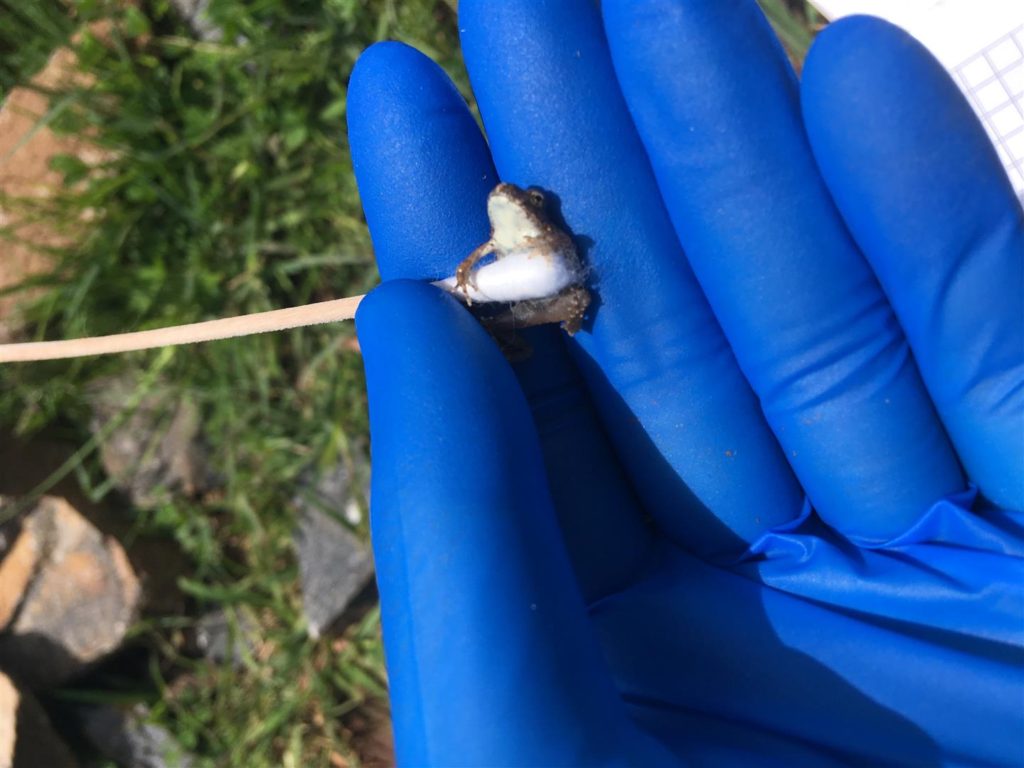 Not just a frog belly rub, we can also get DNA from this skin swab!

This multi-pronged approach we hope will pay dividends for understanding the unique herpetofaunal communities of Ethiopia, and how the church forests contribute to their continued protection. Not only that, the species occurrences and photographs we’re collecting we hope will be both useful and motivating for the people that are both spiritually and instrumentally invested in these forests. The reaction we get when explaining our purpose is typically very positive, and we hope to eventually take our photos and publish a guide to the species we’ve found in Amharic that we can distribute to each church. Given the excitement we’ve already experienced in our forays into these communities, we think it would be appreciated by both priests and parishioners to highlight the amazing diversity of species that their church forests protect.