Research associate, DC Randle, gets honored for his love of science and Amazon project

From The Eagle Grove Eagle:

Albert Einstein once said, “The only source of knowledge is experience.” 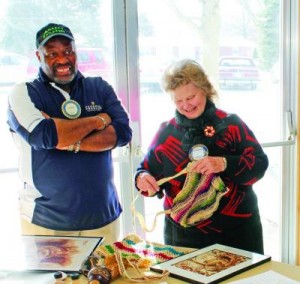 Lawrence “DC” Randle (left) shared some of the artifacts he has brought back from his Amazon adventures with Dr. Fran Petitgrew (right) and other embers of the Eagle Grove Rotary recently. Photo by Kim Demory

Lawrence “DC” Randle, brother of Rotary Senior Living Administrator Sam Boeke, has echoed that statement since he began his teaching career 30 years ago. He believes that the best way for kids to learn is through first-hand experience.

“I’ve always taught environmentally, but in order to teach, I believe you should have life experiences,” said Randle, a biology and wildlife management instructor.

Randle isn’t your “basic science teacher.” He began his career teaching behaviorally challenged students at Saint Francis High School in Minnesota. He gladly took the class of kids the others thought were too difficult to teach. He got the kids’ attention by letting them experience the world around them, not just in a text book, but in the real life environment around them. One of the ways he did this was by starting a turtle project with them. The goal was to trap the endangered Blanding turtle, mark them, and then put them back in nature to study and learn from them.

Randle said other teachers couldn’t believe he was doing this kind of project with “these kinds” of kids…but he did, and they were interested in learning.

This project and other environmental work on rivers, eventually won Randle a state award. It also later led him to learn of The Jason Project, a non-profit organization that gives middle school students, both inside and outside the classroom, a connection to “real science” and exploration. It’s meant to encourage students to study and pursue careers in STEM (Science, Technology, Engineering, and Math) fields.

The Jason Project was founded in 1989 by Dr. Robert Ballard, the oceanographer who discovered the sunken remains of the historic Titanic. Randle wanted in the worst way to bring Ballard’s program to his students at Saint Francis, but it was unfeasible for the school district at the time. But Randle didn’t give up. While attending a science convention at a later date, he met Amy Theisen the local Jason Project Leader in Minnesota who knew of his work. She was impressed and told Randle he should apply to go on a Belize Jungle Expedition. At first, he thought this was a contest that you win by pulling your name out of a hat, but further conversation lead to greater understanding of this was applying for a spot on a scientific research team. Randle was reluctant to do so, but with further encouragement, he decided in order to live by his own motto of teaching by experience, he had to at least give it a try. Randle made it through the first two rounds of cuts from amongst applying teachers around the world. Then came an interview with Ballard himself. Randle was honored to be chosen by Ballard as one of six teachers to accompany him on the expedition.

This opened up a whole new world of opportunities for Randle, including taking part in an Amazon Exploration Project. He accepted that invite more than 20 years ago and is proud to say he has continued to be a part of the project each summer ever since returning for 10 days in June, and again for 10 days in July, every year. Each time, he brings with him a group of students (now totaling more than 200) ready to be a part of the Citizen Science in the Peruvian Amazon and offering them the chance to experience first-hand the world of tropical ecology, indigenous culture, sustainable development, and rainforest research.

Do you know a student kindergarten through 12th grade who would like to go? They also welcome k-12 educators to join them. To find out how to apply and what adventures await them in the world’s largest rainforest, or if you just want to learn more about the work being done in the Amazon and discoveries being made, be sure to read next week’s Eagle.

Lawrence “DC” Randle has been living a life of adventure. Dedicating his life to sharing those adventures with students, Randle has given hundreds of kids the opportunity to travel with him for an Amazon experience they will never forget. 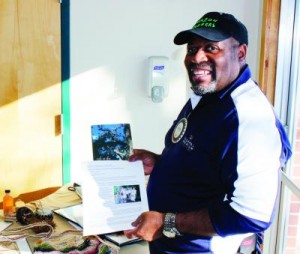 Lawrence “DC” Randle is a teacher, Amazon expedition leader, author, collector, and so much more. He would like to share these experiences of the Amazon with high school and undergraduate students who are interested in accompanying him on a Citizen Science in the Peruvian Amazon trip. Photo by Kim Demory

The Citizen Science in the Peruvian Amazon program gives students the chance to overcome their fears, build confidence, practice team work, experience science first-hand, and develop a connection with one of the world’s most biodiverse and globally important ecosystems.

“It’s an incredible experience for your curiosity and wonder,” said Randle. “You don’t have to be a scientist, just willing to help those who know how. You are doing real research with real scientists.”

The possibilities of what a student will learn and experience while in the Amazon rainforest for 10 days are limitless. They will work side-by-side with scientists, interact with native people of the land (learning how they use the forest for shelter, food, and medicine), and ascend 115 feet on a quarter-mile Rainforest Canopy Walkway.

They will encounter a vast variety of animals and hundreds of thousands of species of insects. Just some of them include the gliding ant, new beetle studies, wildlife sightings, the dead leaf mimic katydid, poisonous dart frogs, giant ant eaters, giant snails, three-toed sloth, translucent-winged butterfly, and so much more.

“Studying the toughness of a leaf might not seem important, but certain animals only eat certain plants. We want to know why,” said Randle.

One of the plants native to the forest, Una De Gato, also known as Cat’s Claw, has been studied since the 1970’s. Although virtually unheard of in the U.S. until recently, this “miracle herb” as it’s been called, is showing promise in the treatment of rheumatoid arthritis, diabetes, cancer, and more.

A night hike into the jungle reveals thousands of species of insects and frogs. It gives them a glimpse into the secret lives of snakes, bats, sleeping birds, katydids, scorpions, nursery web spiders, and tarantulas. Many of which are specimen studied with scientists the next day.

While this thought may seem overwhelming for a parent sending their child to the Amazon, it is a safe environment.

“Different animals visit us at times, but they don’t hurt you.” Randle insisted.

Just ask some of the students who have gone in the past. Many of them have said, “It’s a life-changing experience.” Even those who have held an eight-foot anaconda.

In fact, while Randle said each of his students he leads on the adventure are special to him; there were two that really left a lasting impression on him. There was a boy and a girl who recently joined him that told Randle they had heard him talk to their class about the Amazon and the trip when they were in kindergarten and first grade. They said they went home and told their mothers that day that someday they were going to go on that adventure with Randle and they did. In fact, Randle has a picture of himself standing with that boy in the Amazon actually holding an anaconda. It’s something he probably wouldn’t have done normally, but the teacher found inspiration from his students to just grab a wild eight-foot anaconda and share it with them. There is always something to be learned in the Amazon.

Students will also experience living the simple life while in the Amazon. There is no electricity; there is no glass on the window openings; no cell phones, no curling irons, there is no air conditioning only the raw elements of nature that surround them and challenge them to spend time being one with the Earth and each other.

“It is a life-altering experience… no question about it,” said Randle. So why go? It’s ecological research for a sustainable future.

“There are a lot of things that go on in the rain forest that affect us worldwide,” said Randle. “If we don’t look at those relationships that keep us alive, we will only be hurting ourselves in the long-run.”

Do you know a student kindergarten through 12th grade who would like to travel to the Amazon and experience first-hand the world of tropical ecology, indigenous culture, sustainable development, and rainforest research? It’s an incredible opportunity that a child will most likely never forget. Read below for more information.