You do not need the use of your legs to be a field biologist. Join CanopyMeg‘s summer research undergraduates who will be studying the ecology of temperate forest canopies. From wheelchairs to ropes, up and away to study insect defoliation to leaves, micro-arthropods, and especially the secretive waterbears or tardigrades that may live in water droplets. Stay tuned! 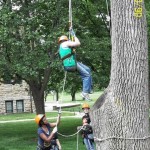 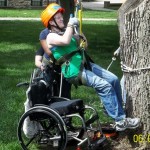 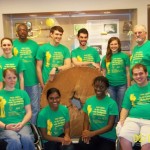 From the Baldwin City Signal:

On her second attempt at tree climbing using the single-rope technique, Rebecca Tripp quickly ascended a 15-foot rope hanging from a branch of a pin oak on the Baker University campus.

“That’s as high as you can go,” said Dan House, a member of Tree Climbing Kansas City, who was instructing the first-time climber in the technique. “You want a higher tree, don’t you?”

Tripp nodded yes — and lowered herself into her wheelchair. “I used to climb trees when I was a kid,” she said. “When I got in this wheelchair, it was something I thought I’d never do again.”

Tripp and seven other students from around the country were being introduced to tree climbing Thursday as part of a two-month summer research project that Baker biology professor Randy Miller designed with Meg Lowman, who pioneered the single-rope technique’s use in biological field research.

Tripp, who has used a wheelchair since a car accident five years ago, is one of two ambulatory-disabled researchers involved in the project. The eight students in the project will be climbing trees in the area to collect tiny invertebrates called tradigrades, whose appearance under a microscope gives them the nickname water bears.