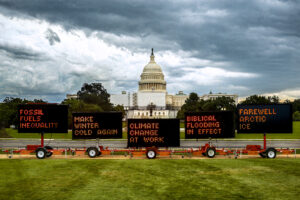 Justin Brice’s “WHY’S AN OCTOPUS ON MY LAWN?” Photo by Alexis Fedoroff, courtesy of lcv.org.

Justin Brice, a sculpture and photography artist with a focus on the natural world, is turning heads. Last week, Brice, a Senior Fellow and Artist-in-Residence at Woodwell Climate Research Center who has climbed into the canopies of Taiwan and photographed in the church forests of Ethiopia with Dr. Lowman, installed his latest piece, entitled “WHY’S AN OCTOPUS ON MY LAWN?” on the National Mall. It comprises five solar-powered construction billboards that flash bold messages about the climate crisis.

The name for Brice’s piece was inspired by “sunny day flooding,” a phenomenon becoming more common along the coast, especially around Miami, FL, where rising sea levels cause the ocean to literally wash up to residents’ front doors in low-lying areas. Brice’s long-time friend and neighbor in Brooklyn is well-known landscape architect Walter Meyer. While Brice and Meyer were together recently, one of Meyer’s clients called and asked “Walter, why’s an octopus on my lawn?” referring to the ocean life that remained in his garden after a high tide had receded. “It just stuck with me, and I couldn’t get it out of my head” Brice said, naming his installation accordingly.

Brice said that he hoped the medium would convey the urgency of the climate crisis, that there is action to be taken. The piece was commissioned by the League of Conservation Voters, a D.C.-based organization that lobbies for environmental progress through voting and political action. It was installed at what environmentalists hope is a critical turning point in the U.S.’ approach to the climate crisis.

This week, the Senate passed the Inflation Reduction Act, a budget bill aimed at tackling the climate crisis, lowering healthcare costs, and reducing the deficit. While the bill is little more than a skeleton of the legislation that climate activists dream of passing, as the first piece of legislation addressing global warming to be passed, it is a significant step in the US’ climate policy.

The bill is expected to pass the Democratically-held House later this week before it reaches President Biden’s desk, where it will be signed into law. It outlines financial incentives for investments in green energy, tax rebates for electric vehicle purchases, and fines against companies who fail to address methane leaks. Most importantly, climate scientists say that it could help Biden reach his goal of a 40% reduction in U.S. emissions by 2030 and will get the nation back on track toward its Paris Climate Accord target.

U.S. climate legislation has been a very long time coming and is the result of the work of many environmentalists, including Justin Brice and his innovative and persuasive installations. While it is not the political be-all-end-all to address climate change by any means, it is a source of optimism for environmentalists across the country.

Here at TREE, we are doing our part every day in the fight against climate change. Through our education and exploration efforts, we are engaging hundreds of young people in environmental conservation annually. Our MISSION GREEN initiative slows deforestation and protects valuable carbon-sequestering forests through construction of canopy walkways in biodiversity hotspots globally. Most importantly, we are working to protect trees everywhere, which play a critical role in slowing global warming and protecting our Earth as we know it.