Canopy Meg talks about her passion for treetop exploration, ecology and the Penang Hill project 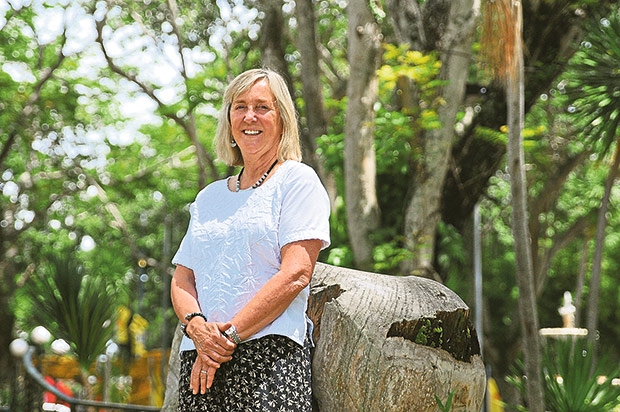 Dr. Meg Lowman was recently in Penang to attend the First Penang Hill Biodiversity Study Symposium at Universiti Sains Malaysia (USM) and she will be partnering with USM researchers in a state initiative to help designate Penang Hill as a Unesco Biosphere Reserve.

Here, the 62-year-old talks about her passion for treetop exploration, ecology and the Penang Hill project.

In her own words:

I grew up in a very rural place where there wasn’t a movie theatre and all I did was play outdoors with my friends. We did climb trees for something to do. This is even funnier… I had a next door neighbour, a funny guy named Tommy Hilfiger who’s now a famous clothing designer… his sister was my best friend. He collected Beatles albums, I collected beetle bugs. We just laughed about it. His sister was my dedicated tree climbing friend. She’s still my best friend and she’s in the fashion world.

I actually did the first canopy research in Australia in the 1970s. I was looking at issues like insects eating leaves and I realised that everybody had addressed research in tropical rainforests prior to my time by just doing it from the forest floor. But if you think about it, it’s kind of like looking at your big toe and making decisions about your whole body.

The last 30 years has been all about developing the tool kit for studying forest canopies, creating how get to the top of the tree, training a generation of students to do that. And now, we have the tool kit, pretty much officially defined and this is the opportunity to ask those questions. But, in the mean time, in those 30 years, we’ve lost about 15 per cent of our tropical rainforests, so we are fighting against time to hurry, trying to find answers to important questions like what lives up there, what pollinates what, which trees are the most important. All of these things need to be done in a relatively urgent timeline if we possibly can do that.

First of all, Malaysia… this is one of the biodiversity hotspots in the planet, this region in general. But there are very few research stations and long term opportunities for scientific research in tropical rainforests. The only really global station is in Panama.

The partnership with a local university here…my role would be bringing in international distinguished scientists to partner with the local scientists. Now, to become a Unesco site, we need more knowledge about the biodiversity that inhabits the place, we need more understanding of the history of the ecosystem so that the next few years will be dedicated to discovery in that sense.

I absolutely expect to discover new species here. Even last year, USM was up there for several days and they discovered several new species. They even think they had a new species of orchid which takes time to confirm but they are working on that. I can absolutely promise you that there would be lots of new species discovered. This is simply because nobody’s been in the canopy.

I would love to be part of the launching of the research, I would love to help direct what is the important research given the urgency of rainforest conservation with the plans for a field station, it needs strategically to have the research co-ordinated, we cannot run into the forest to collect everything for example, we have to really think about what’s important.

I also hope that I can be a voice for Penang Hill Corporation or be the international voice, because I think this project is bigger than just Penang. Even though, I’m really thrilled that USM takes leadership with it, I think it’s global and you need people that can connect globally to jumpstart that opportunity. You don’t want to have 30 years go by and then you become global. You want it to have to happen with a lot more strategic planning.

I think there are two things about Unesco inscription. I think that this site could become a famous research site without the Unesco approval but I think Unesco has a very good reputation in the world of conservation, including cultural as well as biodiversity conservation, so it will put it on the global map and then these people (The Habitat) will control and contain the use of the site.

The neat thing about the plan now, I believe they have a tourist area but then there will be some more pristine forest that can be truly preserved by the Unesco allocation. So that’s the beauty of how these guys do it. I think in the scientific perspective, with 7 billion people on the planet, it is now recognised that almost every pristine area has a human footprint and I think the priority of science these days is to figure out how to maximise humans interfacing with Nature and sustaining it at the same time.