Taiwan Explores and Celebrates Her Treetops 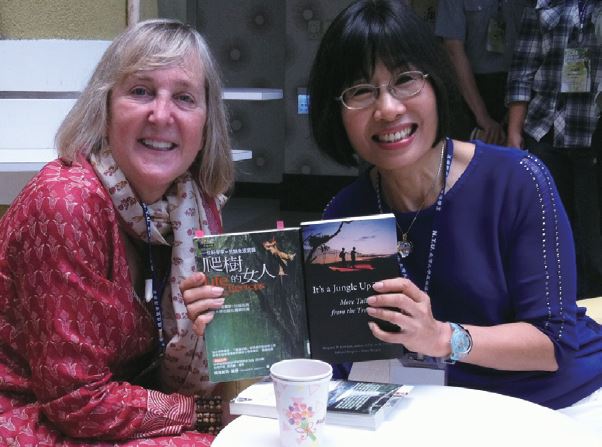 In 2009, two young Taiwanese biologists arrived at my doorstep in Sarasota, Florida, determined to learn everything about the canopy walkway built in nearby Myakka River State Park. This unique treetop walk has not only inspired research discoveries, but has also doubled (even tripled) visitors to this American park. The dream of my international visitors was to build one in Taiwan, and uncover the mysteries of biodiversity in their native treetops. Despite the sultry humidity of a blazing hot June day, we traipsed around the Florida walkway measuring and photographing every bolt and cable, and discussed how the walkway was constructed and operated.

Only five years later, Chiu-Fang Lee, the director of Taiwan´s Shei-Pa National Park, invited me to the grand opening of their canopy walkway, constructed on schedule and under budget! Based on the design of other global walkways for canopy research, Shei-Pa National Park´s walkway officially opened on April 15, 2014 and cost approximately $24,000 US. The country already has a tourist skywalk, attracting hundreds of thousands of visitors per year. But there was no site dedicated to research. Two young Taiwanese scientists, Yung-Hsiang Lan and Kuo-Ming Fu, were the catalysts for this new research venture; and their scientific careers are now launched in the treetops of Taiwan. One thrilling innovation to our American canopy design was their addition of a small generator to literally propel up a rope and into the uppermost bridge of the Shei-Pa canopy, truly a great vertical ride!

After visiting Taiwan, I have written extensively about the wonders of this extraordinary country, and her gorgeous forest canopies. Formerly called Formosa, Taiwan is an island located 160 kilometers off the coast of mainland China, almost the same size as Massachusetts and Connecticut combined, and home to 23 million people. Taiwan has an extensive national park system that protects the country´s ecologically significant regions, provides recreational opportunities, and stimulates economic growth through tourism. Despite its relatively small size as an island, Taiwan has over 200 mountain peaks above 9,000 feet, so it actually boasts over triple the land surface than if it were flat. Shei-Pa National Park embraces approximately 150,000 acres of high mountain landscapes in the remote interior of Taiwan. The country is increasingly popular for hikers, birdwatchers, and nature-lovers.

Why canopy research and why Taiwan? Taiwan pr ides her sel f on ext raordinary conservation. Expansive tracts of primary forest have been carefully conserved for future generations, and their biodiversity includes such amazing creatures as Formosan landlocked salmon, Formosan black bears, and over 100 species of native butterflies. Over 1000 species of plants dominate their montane forests including enormous canopies of Yushan juniper, Taiwan red cypress, and Chinese hemlock. Whereas Americans originally cut down over 95% of our own primary (or original) forests, Taiwan has retained enormous swathes of original, old-growth trees. One of the country´s six major national parks, Shei-Pa is a wonderland of unique biodiversity. This means that forest scientists can determine what lives in the original forest canopies, not just the secondary regrowth; such discovery may shed light on the true nature of healthy forests. Taiwan´s canopies are a treasure for the entire planet, not just for Taiwan.

Also of great scientific importance, Taiwan´s isolation as an island has resulted in many endemic species (translation: species native only to this single place). Anyone who is fortunate to visit Taiwan might see the Formosan rock-monkey, the Taiwan wild boar, Mikado pheasant, or the Formosan sambar – all unique to this island nation. Perhaps the most incredible creature to me was the Formosan landlocked salmon, which has adapted to living entirely in fresh-water lakes and streams without the conventional migration to the ocean and back. Understanding how fish adapt to such significant changes in their movements may provide critical knowledge in dealing with the future of fisheries that are currently threatened by ocean acidification or other environmental degradation.

Taiwan now joins a growing number of countries who are trying to understand the scientific secrets of forest canopies. The treetops is the interface between land and atmosphere, and is home to an estimated 50% of our terrestrial biodiversity. Healthy forests are critical to the health of all life on earth. So I celebrate Taiwan, and I look forward to seeing the next generation of forest scientists who will train in the canopy walkway of Shei-Pa National Park.

PDF version of the article in both English and Mandarin: