A Visit From a Science Rock Star 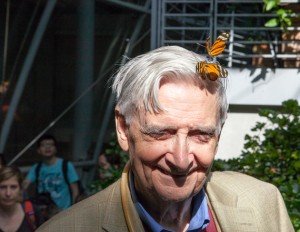 As thousands of festival-goers flock to Coachella over the next two weekends, rock stars are on many minds across the country. But here in San Francisco, I’ve been reflecting on a different kind of groupie-worthy icon — the one and only E. O. Wilson, champion of conservation, father of sociobiology and distinguished lover of all things six-legged. Unlike sports or Hollywood, the profession of science does not have many rock stars, but Ed Wilson is one of the few notables in the geek world of science who undoubtedly deserve that label.

A few weeks ago, I invited Ed to come visit us here at the California Academy of Sciences, and our halls had a palpable buzz in anticipation of his arrival. Exactly what creates charisma and stardom? And how does a modest myrmecologist (translation: scientist who studies ants) become a global voice for science with a fan club of millions? I don’t imagine Ed Wilson has a clue as to how his persona evolved, but his voice is undisputedly heard from the White House all the way to the rural school rooms of Alabama where he grew up. And inside halls like ours, it is revered.

Opening the door of his taxi, I greeted Ed with a pooter. His face lit up with joy. This silly-looking necklace with a rubber hose attached to a plastic vial is actually an excellent field device for collecting ants. For years now, I have given Ed a pooter each time I meet up with him (earning me the nickname of “pooter provider” among my staff), and our secret signal of friendship has become a ritual.

Seeing the California Academy of Sciences for the first time is an overwhelming architectural sensation. Ed gazed up at the green roof of our LEED platinum building in awe, saying, “Gosh, I would be happy to work here even without a paycheck!” (I secretly filed that comment away, to share with my staff the next time anyone grumbled!) Despite his 86 years of age, Ed Wilson is a kid at heart. He was thrilled to explore our vast specimen collections and exclaim with wonder inside our four-story living rain forest exhibit, the largest of any museum in the world.

A band of awestruck staff escorted Ed through the butterfly-proof entrance of the glass-domed rain forest. It was a thrilling moment for them to share their daily work with this rock star of biodiversity. Animated conversations about how to water the plants, care for the leaf-cutter ant colony, rear poison dart frogs, replace bromeliads in the canopy and predict where the blue-morpho butterflies will be sunbathing created a cacophony of delighted scientists, all sharing their stories. Ed was full of tales of his own, recalling encounters with large spiders, episodes of early collecting trips, and his first forest canopy climb up a rickety tower on Barro Colorado Island, Panama. At one point, when he paused in the mid-canopy, two butterflies landed on his head (even they seemed to know what a special visitor was in their midst).

Next, I took Ed into the heart of the Academy’s research laboratories, where students were lined up as if awaiting the arrival of Santa Claus. One clutched her jar containing a new fish species; another flashed his new ant from Madagascar on a computer screen; and a third brought a genomic image to share proudly with this eminent biologist. Ed reclined in a lab chair, munched on some Oreos (my own personal favorite field expedition snack) and gave some wonderful advice and commentary to each student. It was obvious that one of his favorite moments in life is mentoring students, and the excitement was mutual.

At lunch that day, Ed Wilson shared his BHAG (big, hairy, audacious goal) that forms the basis of his next book, called Half Earth. Ed is proposing that humans occupy half the earth (which we already do) but that we set aside the other half for the millions of other creatures that share this planet with us. He is dead serious, and he knows there is very little time to pull off this extraordinary goal. He predicts a mass extinction crisis if we fail to create a system of large wild landscapes to accommodate biodiversity. His upcoming book, Half Earth, provides details for this plan; without doubt, his innovative vision will probably create an uproar–but ultimately lead to great advances in global conservation. He’s not afraid to fight for his goal. “Battles are where the fun is,” he said, “and where the most rapid advances are made.”

As Earth Day approaches, I’d like to take a moment to thank Ed for inspiring so many scientists and science enthusiasts to better understand and protect our planet’s precious natural resources. Our world could use more rock stars like this one.