How to Raise a Woman Scientist 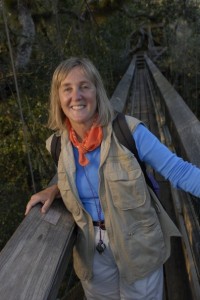 Although things have changed considerably for women in the world of science since the brave and bold Marie Curie began paving the way, there are still far too few women pursuing science careers, including my own field of forest canopy biology. Simply put, we’re missing out on a tremendous number of great minds.

Sheryl Sandberg recently wrote a best-selling book called Lean In, providing advice for women to succeed in the workforce. As a treetop scientist, (and definitely without the paycheck of a COO at Facebook!), my parallel title to aspiring field biologists is Climb UP. Instead of offering advice on how to succeed in a man’s world of business, I offer heartfelt advice on how to get a foot — or merely a toe — in the door of professional science. Our world is truly disadvantaged to continue to overlook women — more than half of the global IQ — as we try to respond to the planet’s most pressing issues. In many countries, such as Ethiopia, India, Peru and Cameroon where I conduct research, only a handful of women scientists exist among populations that number in the millions. And even in relatively advanced America, women are still under-represented in leadership positions throughout most scientific professions.

My own personal story should admittedly be titled “the mis-adventures of Meg,” and when I share my stories with groups of young people, I hope the tales will help the next generation avoid some of the same pitfalls. Throughout my college and graduate career, women were a stark minority–I was often the sole woman in my class. At Sydney University, the gentlemanly graduate department chair called me in and asked “Why are you trying to pursue a Ph.D. when you’ll only get married and have children?” Undaunted, I continued, but my early research expeditions in Australia did, in fact, have me, the only woman, carrying my babies into the field like a kangaroo with her joeys. There was a running joke at the university: “Should Meg take the babies up into the tree and risk them falling, or leave them at the bottom of the tree with all the poisonous snakes?” (I think you can guess which option I chose.)

Today, most of my work is focused on developing countries because not only do their forests need urgent help, but their women need mentoring and encouragement to become successful stewards of their environment. So how can we all help our daughters become scientists? First and foremost, parents play a critical role. And as a mother of boys, I think these recommendations for parents apply to both genders:

1. Take your kids into nature. Family vacations should not only be about Disney World or dodging traffic jams in New York City. What about picnics in a state park or taking a walk to look for butterflies? One of my favorite memories is my mom getting up at dawn with me to go bird watching. She didn’t even own binoculars, but she cheerfully allowed me to think it was the coolest thing on the planet. (Thanks, Mom!)

2. Let your kids get muddy once in a while. I only became a scientist because my parents kindly let me play in the backyard and tolerated my dried-flower collection in our telephone book (in those days, a hefty bound tome of paper). My own kids admittedly ate their fair share of dirt and earthworms!

3. Be patient and encourage them to use their five senses. Touch, hear, watch, taste, and smell. And teach your kids to truly observe nature. My parents used to stop the car alongside highways when I wanted to collect a new wildflower. They knew nothing about botany or classification, but they were tolerant of my passion for plants, and patiently waited while I observed, smelled, and touched.

Finally, to inspire more women scientists, women need to mentor women! On each research trip I take to India, I mentor women wherever possible. Despite their cultural challenges, these girls are brilliant, and someday, at least one of them might lead India’s forest conservation efforts. I just returned from a Fulbright scholarship to Ethiopia to mentor women in science at Jimma University. Alas, only a handful worked in the sciences, but I hope our sisterhood empowered them! This fall, I eagerly await the arrival of Tizezew Shiekach Sisay to America, the first woman from her region of Ethiopia to pursue a master’s degree in women and the environment. If I serve as a role model and sponsor for her, I’m hopeful that she will in turn mentor other Ethiopian women, thereby expanding the sisterhood of science.

As a mother of two boys — both practicing scientists, I am happy to report — we need to keep both genders inspired to pursue this important work. The challenges of keeping 7 billion people and up to 100 million species alive on our tiny planet require that the best and brightest minds be devoted to science. Science equals solutions.