Taiwan Follows in the Scientific Footsteps of Florida State Park

Sometimes I spend all day trying to count the leaves on a single tree. To do this, I have to climb branch by branch and write down the numbers in a little book. So I suppose, from their point of view, it’s reasonable that my friends say: What foolishness! She’s got her head in the clouds again.

But it’s not. Of course I have to give up, but by then I’m half-crazy with the wonder of it–the abundance of the leaves, the quietness of the branches, the hopelessness of my effort. And I am in that delicious and important place, roaring with laughter, full of earth-praise. — Mary Oliver, poet 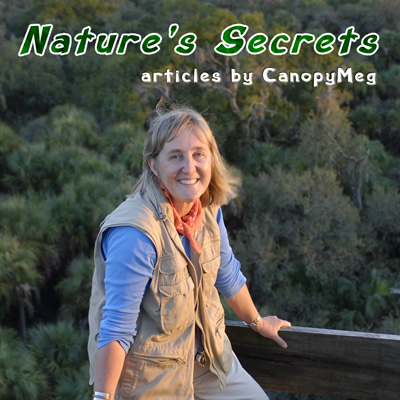 In 2009 two Taiwanese national-park employees arrived at my doorstep in Sarasota, Florida, determined to learn everything about the canopy walkway built in nearby Myakka River State Park. This unique treetop walkway has not only inspired research discoveries but doubled (or even tripled) visitors to the park. (The increase occurred during a decade in which many American state parks suffered declining visitorship.)

The dream of my international visitors was to build a similar walkway in Taiwan and uncover the mysteries of biodiversity in their native treetops. Despite the sultry humidity of a blazing hot June day, we traipsed around the Florida walkway, measuring and photographing every bolt and cable and discussing the nuances of how the walkway was constructed and operated. Some five years later Chiu-Fang Lee, the director of Taiwan’s Shei-Pa National Park, invited me to the grand opening of their canopy walkway, constructed on schedule and under budget.

Based on the design of the Florida walkway, America’s first public canopy walkway, Shei-Pa National Park’s new addition officially opened on April 15, 2014, at a cost of approximately $24,000. The country already had a tourist skywalk, which attracts hundreds of thousands of visitors per year, but there was no site for research and ecotourism combined. Two young Taiwanese scientists, Yung-Hsiang Lan and Kuo-Ming Fu, were the catalysts for this new research venture, and their scientific careers have now been launched into the treetops of Taiwan. One thrilling innovation over our American canopy design was the addition of a small generator to literally propel researchers up a rope and onto the uppermost bridge in the Shei-Pa canopy, truly a great vertical ride!

If Taiwan is not on your bucket list, it ought to be. Formerly called Formosa, the island nation is located 160 kilometers off the coast of mainland China. Home to some 23 million people and covering an area the size of Massachusetts and Connecticut combined, Taiwan supports an extensive national-park system that protects the country’s ecologically significant regions, provides recreational opportunities, and stimulates economic growth through tourism. Despite its relatively small size, Taiwan has over 200 mountain peaks above 9,000 feet, so it actually boasts more than triple the land surface than if it were flat. Shei-Pa National Park encompasses approximately 150,000 acres of high mountain landscapes in the remote interior of Taiwan. The country is increasingly popular for hikers, bird watchers, and nature lovers.

Why canopy research, and why Taiwan? Taiwan prides itself on extraordinary conservation. Expansive tracts of primary forest have been carefully conserved for future generations, and their biodiversity includes such amazing creatures as Formosan landlocked salmon, Formosan black bears, and over 100 native species of butterflies. Over 1,000 species of plants dominate their montane forests, including enormous canopies of Yushan juniper, Taiwan red cypress, and Chinese hemlock. Whereas more than 95 percent of our primary (or original) forests in America have been logged, Taiwan has retained enormous swathes of original old-growth trees. One of the country’s six major national parks, Shei-Pa, a wonderland of unique biodiversity, is no exception. Here, forest scientists are able to examine species composition in the original forest canopies, not just the regrowth. Such discoveries may shed light on the true nature of healthy forests, and this new walkway will provide the access and perspective necessary to make more of these discoveries possible.