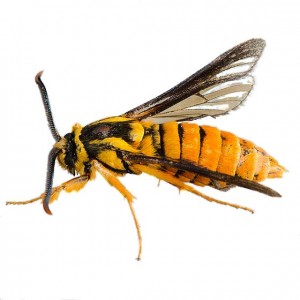 Like this beautiful Paranthrene simulans, many insects pests are worth studying for more than how to kill them. A moth that looks like a hornet but is soft on touch, and whose caterpillar doesn’t eat leaves but carves tunnels inside living trees, is a source of wonder to an observant entomologist. Photo (C) Mark J. Dreiling

We are proud to announce the winners for the second year of the Award: 2013. Over 20 submissions were received from students all around the world, all works of great passion for insects, full of intriguing discoveries. The quality of several papers was so high, and the “coolness” aspect so great, that the committee was unable to decide on a single winner. Instead, the prize of $500 is divided between two winners:

for the article Large shift in symbiont assemblage in the invasive red turpentine beetle published in PLoS ONE (2013) 8(10): e78126: “We demonstrated that the species assemblage of fungal symbionts of the red turpentine beetle changed dramatically after its introduction to China, with the possible exception of Leptographium procerum, a fungus that may have coinvaded with the beetle and contributed to its rapid expansion in China.”

for the article Urban Warming Drives Insect Pest Abundance on Street Trees also published in PLoS ONE (2013) 8(3): e59687: “We discovered that scale insects are more abundant on trees in warmer parts of the city, which indicates that the answer to the long-time mystery of more insect pests in cities than in rural areas may be warming.” (R. Dunn recused himself from judging as he was a coauthor on this paper)

Congratulations, Stephen and Emily! Thank you all for your discoveries, and for your interest in the wonders of insect pests. Our sincere thanks also go to all other students who submitted their papers.

This award serves to promote the study of unexplored aspects of natural history of insect pests. For more information on the award, and for submission of a paper for the year 2014 click here.

The award is supported by the TREE Foundation in Sarasota, FL, and conferred by the Ambrosia Symbiosis Research Group (Jiri Hulcr and Andrea Lucky at University of Florida, Rob Dunn at North Carolina State University, and Anthony I. Cognato at Michigan State University).