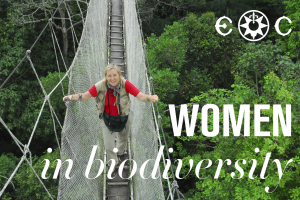 On August 24, 2021 Meg Lowman spoke on a panel hosted by The Explorers Club titled The Species Among Us: Women in Biodiversity. The premise of this panel is as follows:

Billions of years of evolution in our universe and here we are; an animal equipped with capacity for curiosity and immense ability to explore and learn about the millions of wondrous creatures with whom we share the earth. Places with high biodiversity work like bookends, holding up the stories of many species, making possible livable climates. More than ever, in an increasingly unstable climate, our fates are bound with the fates of the species among us. On August 24th, during The Species Among Us: Women in Biodiversity, we will hear from leading biologists and anthropologists about the more than human world and our best chances at living in concert with a world rich in other species.

If you want to watch CanopyMeg participate in an engaging and educational panel then click here!