You can name this newly discovered bark beetle

UPDATE: The winner of this species auction is “rhettbutleri” and was paid by an anonymous donor.

Here is an incredible opportunity to name a newly discovered species of bark beetle! We will be accepting bids for this name-a-species auction up until March 1st at midnight. You may bid as many times as you like up until the conclusion of the auction. The proceeds from this auction will conserve forests of Ethiopia and train the next generation of conservation biologists! 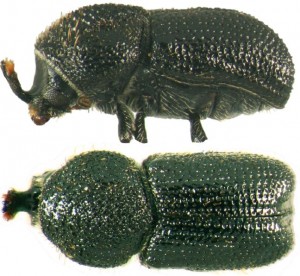 Deadline to bid is March 1st. Hurry and bid now!

This newly discovered species (Cactopinus n. sp.) lives only in the thorny valleys of Oaxaca, Mexico. It belongs to the so-called bark beetles, yet it is unique among them. For one, it has a horn with golden plumage on its head. Why? No one knows. It is also tiny! Smaller than the tip of a pen. And weirdest of all – it lives only in dead cactus, specifically Escontria and Polaskia.