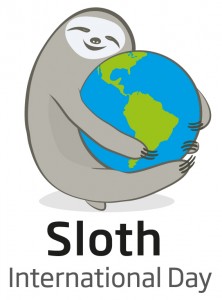 International Sloth Day was created by Foundation AIUNAU who proposed this international day at the First International Meeting about the Wellbeing, Rehabilitation and Conservation of Sloths, held in Medellin, Colombia, in November of 2010.

It was created as it was necessary to bring the world of sloths and their forests to citizens/people around the world as a process of sensibilisation towards wildlife. It is important to get to know this special species, cryptic and shy beings they are, that inspire us and awaken our tender feelings. There is a lot that sloths can teach us – respect, tenderness, joy, peaceful sharing.

However, without consideration, and in our lack of awareness, we harm them so much and bring their existence into danger.

The main objective is to emphasize International Sloth Day as a way to make people sensitive towards wildlife, using its distinctive logo and ensuring mass distribution of the message.

This day is directed towards a broad public, sensitive towards the environment, respectful of all forms of life, wishing to motivate and sensitizing more people towards protection.

According to Sarita Kendall and Tinka Plese, two of the principal organizers of this day, established that October is a very good month. They proposed to commemorate it on Saturday of the third weekend in October. October is a month of animals on the world level and a children’s month.

This year the third international sloth day will be celebrated on the 19th of October. We hope obtain support and resonance from all those who work with sloths and like them.

An important objective will be to position an international Sloth day on the global level. It will serve as a campaign to sensitize citizens through different events organized by participating institutions in their countries of origin. We consider that understanding the problem of these species used as umbrella species, the relation humans – wildlife and the environment can be worked out in their multiple expressions.

The major beneficiaries will be sloths: they will gain recognition of the species, awareness towards their importance in the forests of their origin, teachings they leave to us.