Guide Trainings in the Peruvian Amazon Hosted by TREE Foundation

TREE Foundation teacher intern DC Randle offered Wildlife Conservation and Management trainings to the naturalists guides of Explorama Tours July 1 – 3, 2012 at Ceiba Tops Resort near Iquitos, Peru. The trainings were sponsored by the TREE Foundation and scheduled prior to the NC Museum Citizen Science Expedition with Dr. Meg Lowman. These 2-hour sessions were followed by discussions comparing U.S. and Peruvian policies and emphasizing the important role for naturalist guides in preservation of rainforest habitat and wildlife conservation. 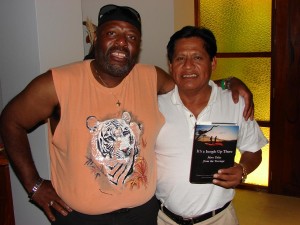 In a lively presentation during each of three days with different groups of guides, DC explored the history of wildlife conservation in the U.S. He first addressed how and why federal, state, and local policies and laws have been passed in the U.S. to protect wildlife. He then took it one step further to look at the creation and purpose of the United Nations’ International Union of the Conservation of Nature and Natural Resources (IUCN) and how it supports global efforts for conservation. D.C.’s special knowledge of the Peruvian Amazon was important in making the training relevant to Peruvian guides. He created many connections, for example making species comparisons of the Bald Eagle to the Harpy Eagle of the Amazon and of the Sequoia tree to Peruvian Mahogany trees.

Copies of Dr. Meg Lowman’s book It’s a Jungle Up There were distributed and referenced during the training. (see photo) During the discussions, the guides reflected on limitations in Peru, where some laws are in place but land areas important for preservation are so vast and there is lack of money allocated by the government to enforce the laws already in place. With these circumstances, the guide’s role is all the more important to provide local environmental education, introduce travelers to ways they can support conservation and encourage scientists to return to do research in the rainforest. The more scientists are working in protected areas and the more local people feel that they are sharing in the benefits of conservation, the more promising the prospects for preservation of the rainforest. It became clear during guide discussions how creating local jobs that are part of the conservation equation can help provide incentives and integrate preservation into the local economy.