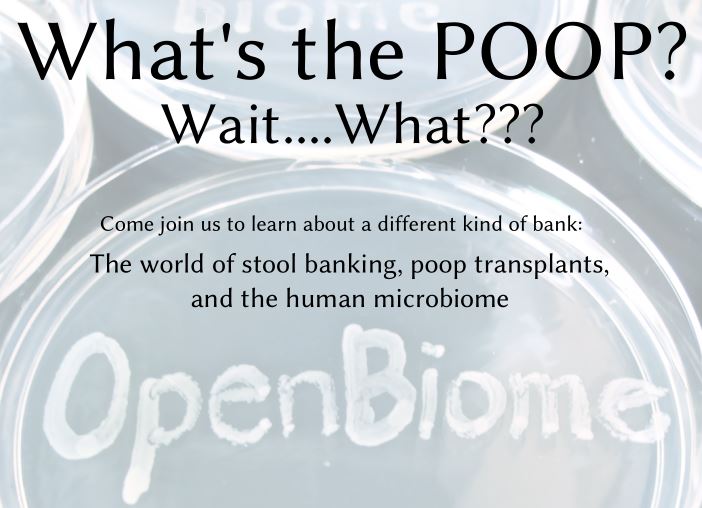 Come join us to learn about a different kind of bank. The world of stool banking, poop transplants, and the human microbiome.

Abstract: James Burgess & Mark Smith co-founded OpenBiome, the nation’s first public stool bank. OpenBiome (www.openbiome.org) is now partnered with over 100 hospitals nationwide and has the dubious honor of being the largest provider of processed stool for use in fecal transplantation. Fecal transplants are a highly effective emerging therapy for the treatment of Clostridium difficile, a so-called hospital-acquired ‘superbug.’ In addition, OpenBiome is leading research into the human microbiome, which are microbial communities living within all of us that appear critical to our health. Whereas the twentieth century was the “age of antibiotics,” the twenty-first century may be the “age of the microbiome” for impacting human health.

About James: James took leave from his MBA program at MIT to co-found OpenBiome, where he is the Executive Director.  Prior to OpenBiome and MIT, James worked at the Bill & Melinda Gates Foundation, where he developed a genetic crop surveillance program in Ethiopia. James is a Sarasota native and attended Princeton University, where he studied Mathematics.

About Mark: Mark received his PhD from MIT in Microbiology, and is the President & Research Director at OpenBiome.  Mark’s research has focused on using computational methods to characterize complex microbial communities, especially the human microbiome. Mark also attended Princeton University where he studied Biology.