Dr. Meg Lowman was a visiting James Martin Fellow at the Center for Tropical Forestry in the Environmental Change Institute, Oxford University during spring 2010. During this time, she conducted workshops for Earthwatch Institute at their European headquarters, directed by Nigel Winser (www.earthwatch.org) . She also lectured for the Environmental Change Institute on Plant-Insect Interactions in Forest Canopies, and on Women in Science — Challenges in Field Biology. She also worked with Global Canopy Programme staff (www.gcp.org) headed up by Andrew Mitchell, whose group has created the Little REDD Book to create metrics for reducing deforestation as part of global climate change strategies.
With colleagues, she visited research projects at Whytham Woods outside Oxford, including their canopy walkway (see photos).
During her Fellowship, Lowman was hosted by world-acclaimed artist Angela Palmer, whose exhibit called Ghost Forest has been viewed by millions of people and called attention to climate change and tropical deforestation. Palmer and Lowman hope to collaborate in future on programs to integrate art and science. For more on Ghost Forests, see www.ghostforest.com 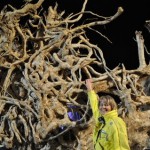 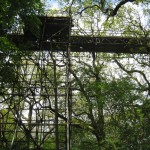 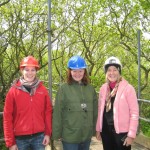